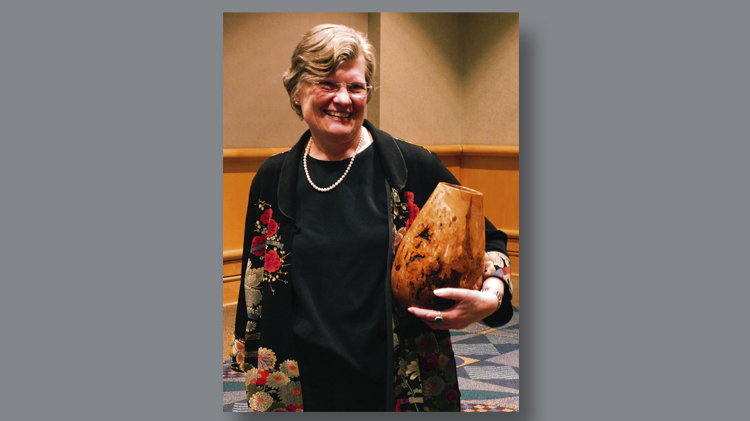 Cheryl R. Ganz at the 2018 Ameristamp Expo awards banquet on Feb. 24, where she won the single-frame Champion of Champions competition.

The exhibit “Zeppelin LZ-129 Hindenburg Onboard Postmarks” by Cheryl R. Ganz was awarded the single-frame Champion of Champions award on Feb. 24.

The award announcement and presentation occurred in Birmingham, Ala., the culmination of the Saturday night banquet at Ameristamp Expo 2018, the annual winter show and exhibit sponsored by the American Philatelic Society.

Ganz is curator of philately emerita at the Smithsonian National Postal Museum and has authored or co-authored several books on philatelic and historic subjects, including Zeppelin Hindenburg: An Illustrated History of LZ-129 with Dan Grossman and Patrick Russell, published last May by The History Press.

Her exhibit of onboard postmarks of the Hindenburg previously won the single-frame grand award and large gold in open competition at APS Stampshow 2017 in Richmond, Va., qualifying her for the Champion of Champions competition at Ameristamp Expo.

Her exhibit was one of 26 grand-award winning exhibits from the past year competing for the single-frame Champion of Champions title.

The marcophily study (a study of postal markings) examines the 10 postmarks used during 1936-37 by the Hindenburg’s onboard post office, a sub-post office of Frankfurt, Germany.

The Hindenburg was “the world’s largest flying post office” according to Ganz. “The zeppelin provided the first regularly scheduled, entirely by air, post service between Europe and North America.”

The airship caught fire during its May 6, 1937, approach at the Lakehurst Naval Air Station in New Jersey. Thirty-six people perished in the spectacular disaster.

Ganz is the first woman to win the annual single-frame championship since the award was first bestowed in 2000.

She is a former Linn’s Stamp News contributor and a current member of the United States Postal Service’s Citizens’ Stamp Advisory Committee.