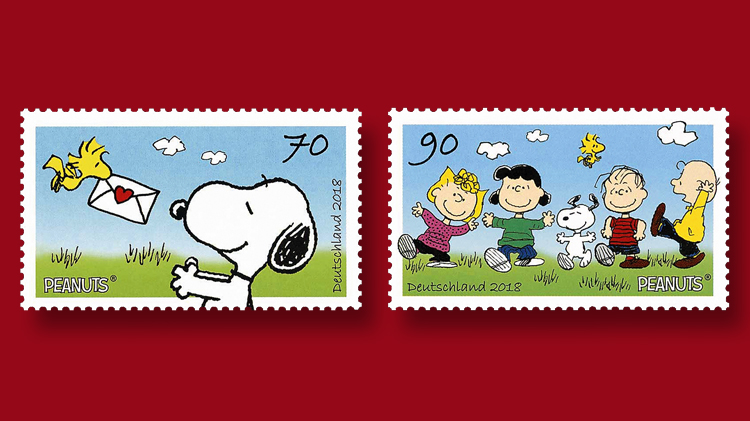 Snoopy and other familiar characters from the Peanuts comic strip are starring on new stamps from Germany’s Deutsche Post.

A 70¢ stamp, called Post for Snoopy, shows Woodstock delivering a letter to Snoopy. The letter is sealed with a red heart.

The Peanuts gang is featured on the 90¢ stamp. In addition to Snoopy and Woodstock, this design depicts Sally, Lucy, Linus and Charlie Brown.

Deutsche Post is issuing the stamps March 1 in three formats: sheets of 10, booklets of 10, and a souvenir sheet with the two designs se-tenant (side-by-side).

Additional Peanuts scenes are shown in the selvage. For example, the selvage of the souvenir sheet depicts Charlie Brown hiding behind a tree, a hot air balloon with the zigzag design from his shirt, and Woodstock typing a letter on top of Snoopy’s doghouse.

A postal card for the March 1-3 Munich International Stamp Fair also shows the design of the 70¢ Post for Snoopy stamp.

The United States and other countries have issued stamps showing Peanuts characters. The U.S. Postal Service depicted Snoopy on a 34¢ stamp in 2001 (Scott 3507) and commemorated the 50th anniversary of A Charlie Brown Christmas animated television special on Christmas stamps issued in 2015 (Scott 5021-5030).

Among the other countries with Peanuts stamps are the Cayman Islands, Gibraltar, Japan and Portugal.