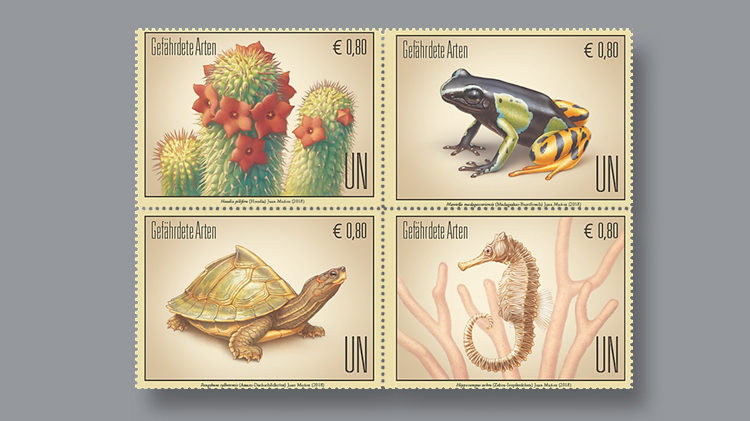 Hoodia, Malagasy painted mantella, Assam roofed turtle and zebra seahorse are featured on the United Nations €0.80 Endangered Species stamps for use from the post office at the Vienna International Center in Vienna, Austria. The stamp illustrations are by 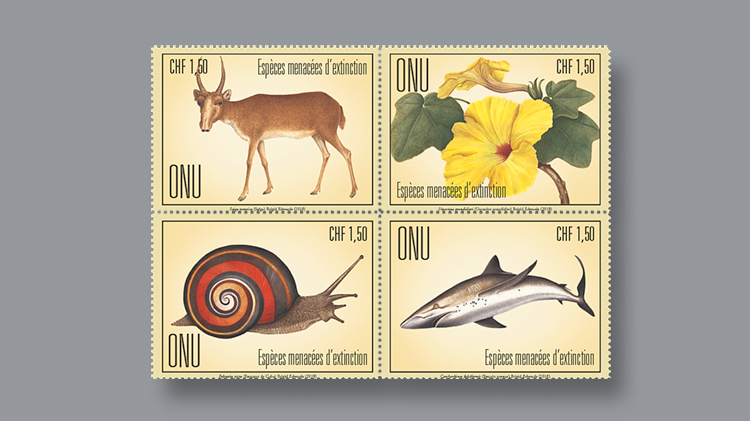 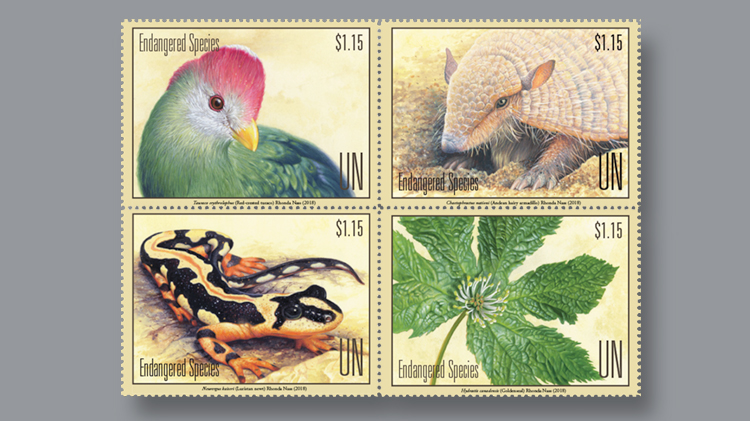 On March 2, the United Nations Postal Administration is issuing the 25th set in its Endangered Species series. The four $1.15 stamps for use from the post office at U.N. headquarters in New York City depict the red-crested turaco, Andean hairy armadillo,
Previous
Next

On the eve of World Wildlife Day, the United Nations Postal Administration will issue a set of stamps to celebrate 25 years of its Endangered Species series on March 2.

Since 1993, the stamp series has represented the need for endangered species protection. The plants and animals featured on the stamps come from the Convention on International Trade in Endangered Species of Wild Fauna and Flora (CITES), an agreement between governments to safeguard trade in specimens of wild animals and plants.

The four $1.15 stamps for use from the U.N. headquarters in New York City feature the beautiful red-crested turaco (Tauraco erythrolophus), a fruit-eating bird endemic to western Angola; Luristan newt (Neurergus kaiseri), a colorful salamander from the southern Zagros Mountains in Iran; goldenseal (Hydrastis canadensis), a perennial herb native to southeastern Canada and the eastern United States; and the Andean hairy armadillo (Chaetophractus nationi), an armadillo endemic to Bolivia and northern Chile.

The four 1.50-franc stamps for use from the U.N. post office at the Palais des Nations in Geneva, Switzerland, depict illustrations of the saiga antelope (Saiga tatarica), a bulbous-nosed inhabitant of the open dry steppe grasslands and semi-arid deserts of central Asia; succulent sesame (Uncarina grandidieri), a bright yellow flower originating from Madagascar; the vibrant Cuban land snail (Polymita picta); and the silky shark (Carcharhinus falciformis), named for its smooth skin.

The €0.80 stamps for use from the post office at the Vienna International Center in Vienna, Austria, consist of the hoodia (Hoodia pilifera), a leafless fat-stemmed succulent; Malagasy painted mantella (Mantella madagascariensis), a frog endemic to Madagascar; an Assam roofed turtle (Pangshura sylhetensis) found in parts of India and Bangladesh; and the zebra seahorse (Hippocampus zebra), a back-and-white striped seahorse found only in waters near Australia.

After using photographs for the past couple of years, UNPA has returned to featuring illustrations of animals on this year’s Endangered Species stamps.

The designs of the panes are similar to most of the previous issues in the series. The selvage includes a border design of silhouettes of different endangered species. Shown in the four corners of each pane is one of the species featured on the stamps. Pictured on both sides of each pane is the U.N. emblem with the year date “2018” and “CITES” below it.

In December 2013, the United Nations General Assembly proclaimed that World Wildlife Day would be observed annually on March 3, the day of the adoption of the Convention on International Trade in Endangered Species of Wild Fauna and Flora. The purpose of the day is to celebrate and raise awareness of the world’s wild fauna and flora.