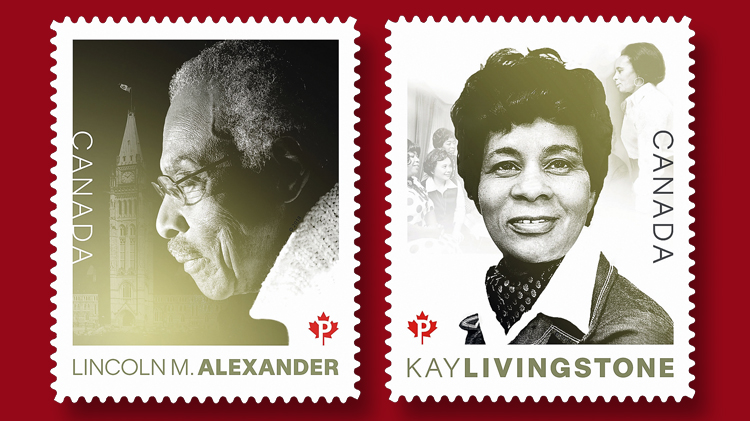 Canada Post remembers the accomplishments of Kathleen (Kay) Livingstone and Lincoln M. Alexander on stamps to be issued Feb. 1 in its Black History Month stamp series.

The nondenominated “P” permanent-rate stamps (85¢) were designed by Winnipeg-based Tetro, using photos of the two leaders to convey the significance they had on Canadian history.

“The images selected capture a moment that is both internally reflective and formidable,” designer Paul Tetrault said. “The gold metallic glow pays tribute to their visionary influence and trailblazing achievements.”

One stamp spotlights Alexander, a champion for racial equality born in 1922 in Toronto, Ontario. His parents were West Indian immigrants — his mother was from Jamaica, his father from St. Vincent.

As a teenager, Alexander moved to Harlem in New York City with his mother and attended DeWitt Clinton High School.

He returned to Canada in 1939 and served in the Canadian Royal Air Force during World War II.

Alexander obtained a law degree in 1953 and was appointed to Queen’s Counsel in 1965. During his remarkable career, Alexander earned many titles, including first black Canadian to sit in the House of Commons (1968), minister of labor (1979) and lieutenant governor of Ontario (1985).

According to Details, Canada Post’s magazine for collectors, Alexander encouraged countless young people to pursue their dreams, often telling them, “I did it. You can. You will.”

In a profile by Sharon Lem published in 2007 by the Toronto Sun, he said: “I like to help the ordinary people. That’s my claim to fame — being ordinary. I help the hungry, abused women, young children, those with disabilities and those who are ignored. They are the forgotten people and I’m a people’s person who hasn’t forgotten where I’ve come from.”

Among other honors, Alexander was invested into the Order of Ontario and the Order of Canada. Also, his birthday, Jan. 21, is celebrated as Lincoln Alexander Day. Alexander died in 2012 at the age of 90.

In addition to showing a photographic portrait of Alexander, the stamp depicts the bell tower on Parliament Hill in Ottawa. Known as the Peace Tower, it serves as a symbol of Canada.

The other new stamp features Livingstone, an activist, humanitarian and popular radio host devoted to empowering black women. She was born in London, Ontario, in 1918, married George Livingstone in 1942 and moved to Toronto shortly thereafter.

A lover of the performing arts, Livingstone was called “one of Canada’s leading Black actresses” during this time, as well as growing a career in radio.

As the civil rights movement strengthened in the 1950s, Livingstone founded the Canadian Negro Women’s Association. In 1975, she started the Congress of Black Women of Canada, which is now a nationwide organization. In 2011, she was named a Person of National Historic Significance by the Canadian government. Livingstone passed away in 1975.

“We are thrilled that people will learn not only about her efforts but also about the kind of person she was: a mother who served her family and a humanitarian who served her people, her city and her country,” her daughter, Rene Livingstone, said. “She did it generously and she did it well.”

The background of the stamp honoring Livingstone shows a meeting in her home in early 1975, part of the planning for International Women’s Year.

Lowe-Martin printed the self-adhesive stamps by six-color offset lithography in booklets of 10. A total of 130,000 booklets were printed for each design. The stamps measure 32 millimeters by 40mm.

The Livingstone first-day cover (414078131) includes a radio-themed pictorial cancellation from London, Ontario. The cachet features a photograph of Livingstone and her children.

The Alexander first-day cover (414077131) displays a Toronto, Ontario, pictorial cancellation. The cachet shows a photograph of Alexander as lieutenant governor inspecting the Argyll and Sutherland Highlanders of Canada.

These stamps and related items are available at the Canada Post website. Stamps and FDCs are available by mail order from Canada Post Customer Service, Box 90022, 2701 Riverside Drive, Ottawa, ON K1V 1J8 Canada; or by telephone from the United States or Canada at 800-565-4362, and from other countries at 902-863-6550.