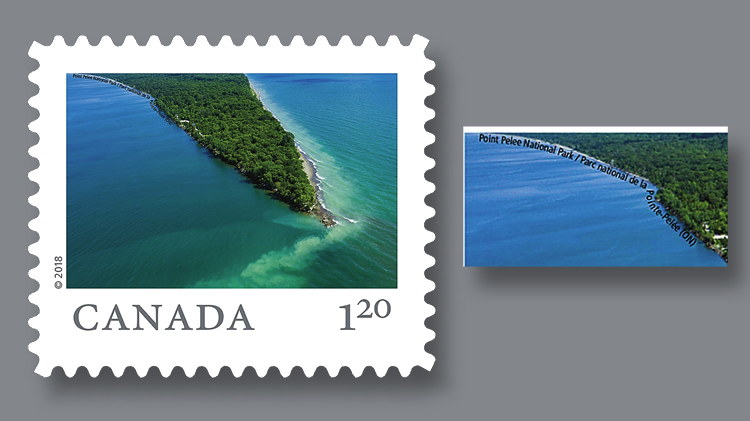 Microprinting reveals the locations pictured on each stamp in Canada’s new Far and Wide series. For example, the $1.20 stamp for the rate to the United States shows Ontario’s Point Pelee National Park. 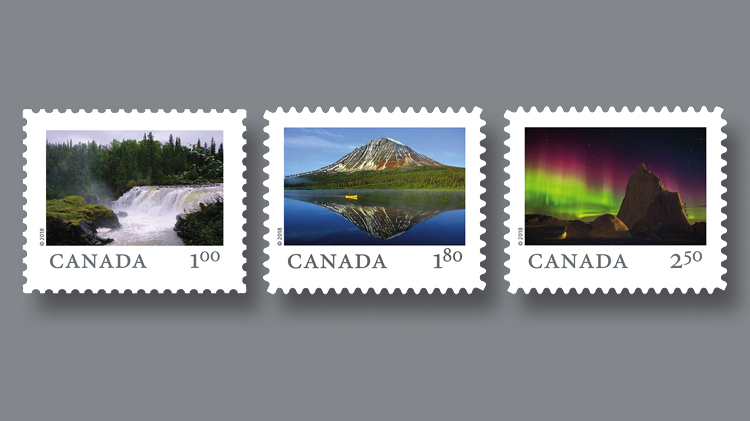 The other three stamps in the first set of Far and Wide definitives picture Manitoba’s Pisew Falls, $1; Naats’ihch’oh National Park Reserve in the Northwest Territories, $1.80; and the northern lights at Nunavut’s Arctic Bay, $2.50. 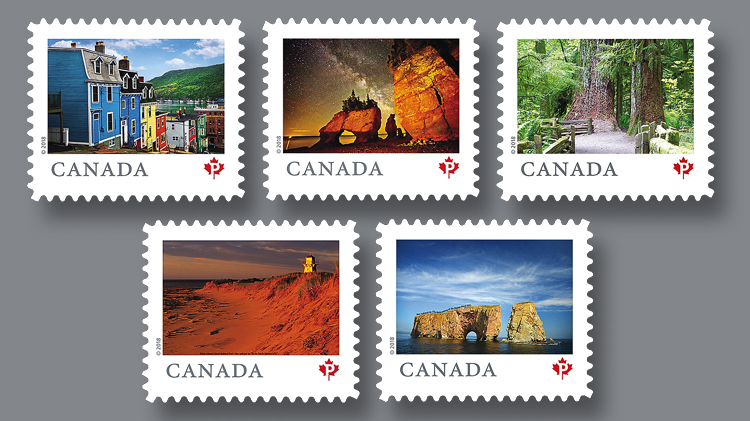 The relevant lyrics are “From far and wide, O Canada,

“We stand on guard for thee.”

Canada Post said, “The first is a multi-year series, these stunning stamps will take you a on a journey to some of the most breathtaking locations in Canada.”

The names of the locations pictured are microprinted in different locations on each stamp. The small text on the $1.20 stamp is shown nearby.

Only one stamp in this set of nine depicts a city scene. This permanent-rate stamp features the colorful houses on Jellybean Row in St. John’s, Newfoundland and Labrador.

The Encounter Newfoundland travel website discusses the history of the colorful houses: “It’s widely thought that the practice is traditional, harkening back to a time when houses were brightly painted to make them visible to fisherman in foggy weather … the truth is that this ‘tradition’ was begun in the late 1970s as a way to inject new life into a declining downtown. Happily, the bright idea caught on with the city’s residents, and the palette spread outwards, lending St. John’s that multi-hued aura of cheer it’s become famous for.”

Another permanent stamp depicts a scene of the old-growth forest of Douglas fir at MacMillan Provincial Park, British Columbia. According to Canada Post, the stamp shows Cathedral Grove, where “visitors can walk on trails beneath the towering trees, some of which are more than 800 years old.”

Hopewell Rocks, also known as the Flowerpots, were carved over thousands of years by the wind and tides in the Bay of Fundy.

The fifth permanent stamp depicts Perce Rock at the Gaspe Peninsula park that bears its name in French, Rocher Perce. This natural limestone arch was named by explorer Samuel  de Champlain in 1607.

The $1.20 stamp shows Point Pelee National Park. Located on the southernmost point of the Canadian mainland, this park is celebrating its 100th anniversary this year. The Tourism Windsor Essex Pelee Island website describes the park as “a tiny sanctuary supporting a mosaic of habitats from jungle-like forest to lush wetlands to open savannah.”

Established Aug. 22, 2012, Naats’ihch’oh National Park Reserve, in the Northwest Territories, is featured on the $1.80 stamp. The design depicts a canoeist dwarfed by the mountain for which the park is named, Naats’ihch’oh.

The Parks Canada website says, “Near the Yukon-Northwest Territories border, the park is in the traditional lands of the Shuhtaot’ine (Mountain Dene), and home to grizzly bear, Dall’s sheep, mountain goats, and woodland caribou.”

Located on the northwest corner of the island and surrounded by hills, this community also is known by its Inuktitut name, Ikpiarjuk, meaning “the pocket.”

Huot is quoted in Canada Post’s January Details bulletin for collectors, “Since the stamps in this series are so tiny, our objective was to keep the design as simple as possible — so as not to detract from the Visual impact of these incredible photographs.”

Lowe-Martin printed the stamps by lithography in booklets, coils and a souvenir sheet.

Canada Post’s first-day cover for this Far and Wide issue bears the souvenir sheet (411233144); a Leamington, Ontario, pictorial cancellation; and an illustration of Hopewell Rocks. Canada Post created 7,000 of these FDCs.

In addition, each stamp design is featured on nondenominated picture postal cards paying the international rate for any destination in the world. The cards sell for $2.50 individually, or $19.95 for the set of nine (262480).