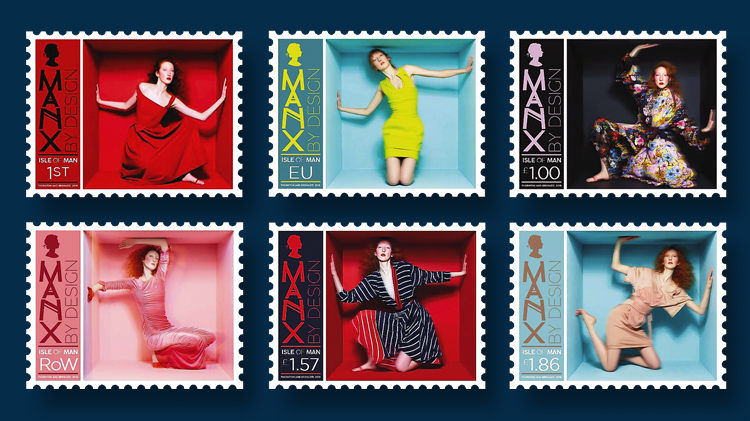 An upcoming set of six stamps from the Isle of Man Post Office highlights the work of two Manx-born fashion designers, Justin Thornton and Thea Bregazzi.

They founded the fashion house Preen by Thornton Bregazzi in 1996. In the more than two decades since then, it “has evolved from a small boutique in London’s Notting Hill to a globally loved brand stocked across 5 continents and an industry insider,” according to the company’s website.

The main part of each design depicts a model in a box wearing a Preen by Thornton Bregazzi dress.

Two of these dresses were made famous by the women who wore them.

The Isle of Man Post Office describes the nondenominated first-class stamp as featuring “the red Finella dress that was famously worn by the Duchess of Cambridge [Kate Middleton].”

According to a report by Caroline Leaper in the Telegraph newspaper, after first wearing the dress in September 2016, the duchess liked it so much that she also purchased it in black.

The stamp inscribed “EU” for the rate to European countries shows a citrus yellow power dress that was worn both by singer Amy Winehouse (1983-2001) and actress Gwyneth Paltrow.

One other stamp in the set is nondenominated. The initials “ROW” in the lower left of the design stand for “rest of the world.” The set is completed by £1, £1.57 and £1.86 denominations.

The Isle of Man Post Office said of the designs: “The images for these stamps were commissioned exclusively for this collection. The model is situated in a box to give the impression that she is inside the stamp. The pictures were shot with a soft focus so that the final images appear almost feel painted. The choice of a red haired model was inspired by Thea’s Bregazzi’s trademark hair. “

Cartor printed the stamps by offset in sheets of 12. They are scheduled to be issued Feb. 1.