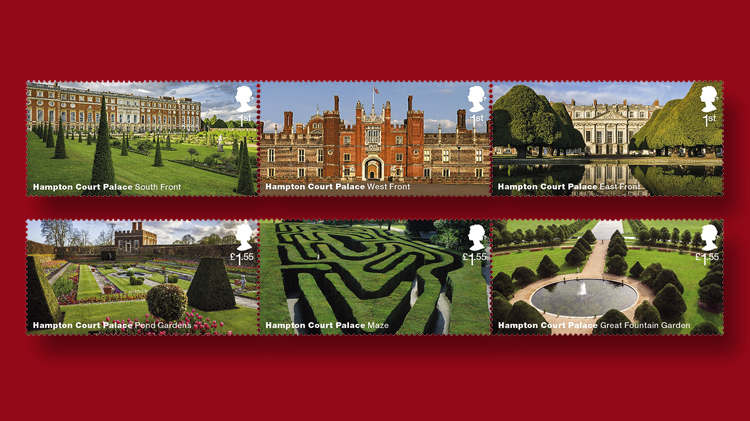 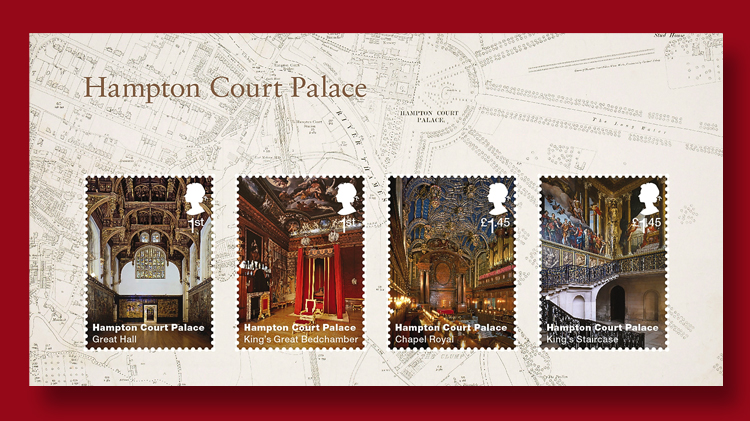 Great Britain’s Hampton Court Palace commemorative set includes a souvenir sheet with four stamps showing photos of the palace’s interior. The image in the selvage is from the official ordnance survey of 1914.
Previous
Next

A set of 10 stamps issued July 31 by Great Britain’s Royal Mail presents photos of Hampton Court Palace, an architectural wonder known to have been King Henry VIII’s favorite residence out of his more than 60 homes.

“Wolsey wanted to create a grand building where he could host not only the king and the royal court but also monarchs from across Europe,” the website said. “Investing huge sums of money, he created a palace fit for the king. Wolsey was so successful in his work that Henry eventually took Hampton Court for himself.”

All of King Henry VIII’s palaces were strategically designed with long hallways to prevent most people from getting close to private rooms, and “to channel people to the spaces appropriate to their rank.” According to Historic Royal Palaces, Hampton Court is the largest surviving example of this type of royal filtering system.

In 1689, William III and Mary II took the throne and commissioned Christopher Wren to build a Baroque-style palace. Instead of destroying the palace, Wren created the Fountain Court and left a lot of the original Tudor architecture in place.

Georgian kings and princes also lived in the palace. The royals left the space in 1737, but a century later Queen Victoria opened it to the public. Hampton Court Palace remains open for tours today.

Six of the stamps for the palace come in two se-tenant (side-by-side) strips of three stamps each.

These exterior photos show the two very different types of architecture. The south and east exteriors were designed with ornate, Baroque architecture, and, in both images, impeccably manicured gardens are in the foreground. The west front exterior was constructed in the Tudor style from Wolsey’s tenure.

The second strip contains three £1.55 stamps featuring (left to right) the Pond Gardens, the maze and the Great Fountain Garden. The £1.55 stamps fulfill the rate for letters to Europe up to 100 grams.

According to the Royal Mail, the Pond Gardens originally held freshwater fish, such as carp, which were eaten at Tudor banquets. The maze was planted in the late 17th century and is the world’s oldest hedge maze.

The Great Fountain Garden was simplified by Queen Anne, who wanted to reduce spending on the royal gardens.

Osborne Ross designed the stamps using photographs from Andrew Butler, James Brittain, Vivian Russell and AerialVue. International Security Printers printed them by lithography in sheets of 60 (sold in panes of 30 at most postal outlets).

The other four stamps in the Hampton Court Palace set are in a single souvenir sheet.

The first two are nondenominated first-class stamps that show the Great Hall and the King’s Great Bedchamber.

The Great Hall was where the Tudor court dined and where parties were held. In addition, plays by William Shakespeare were performed for James I there. Beautiful tapestries specially designed for the hall during King Henry VIII’s reign can still be viewed today, as they have been professionally conserved.

The King’s Great Bedchamber was used more for impressing visitors than sleeping. William III had a gilded railing installed to keep his guests back from his red velvet bed situated under a painted ceiling. The ornate woodwork throughout the room was crafted by carver and sculptor Grinling Gibbons.

The Chapel Royal and King’s Staircase are featured on the two £1.45 stamps in the souvenir sheet.

The chapel’s blue and gold vaulted ceiling was made in Berkshire and transported to the palace via barge. The ceiling is best seen from the balcony, where the king and queen worshipped, elevated above the congregation.

The King’s Staircase was the grand entrance to the king’s state apartments. Historic Royal Palaces said: “In Georgian times, visitors to court could only enter if their clothes and jewels passed muster with the guards.”

William Kent painted the walls of the staircase, depicting “a lively 18th-century court full of intriguing and unexpected characters.”

The ceiling paintings by Italian artist Antonio Verrio “contained coded messages about the power and the knowledge of William III, who built this room to rival the opulence of Versailles, home to the French king Louis XIV,” according to Royal Mail.

The souvenir sheet measures 146mm by 74mm, and its stamps are 27mm by 37mm and perforated gauge 14. The photos are by Crown copyright Historic Royal Palaces, Robin Forster and James Brittain. The sheet’s background image is part of an official ordnance survey from 1914.

Additional products for the set include first-day covers; a presentation pack that includes the six stamps, the souvenir sheet and the history of the palace and its transformation; a press sheet of 10 souvenir sheets; and 11 postcards depicting the 10 stamps and the souvenir sheet.