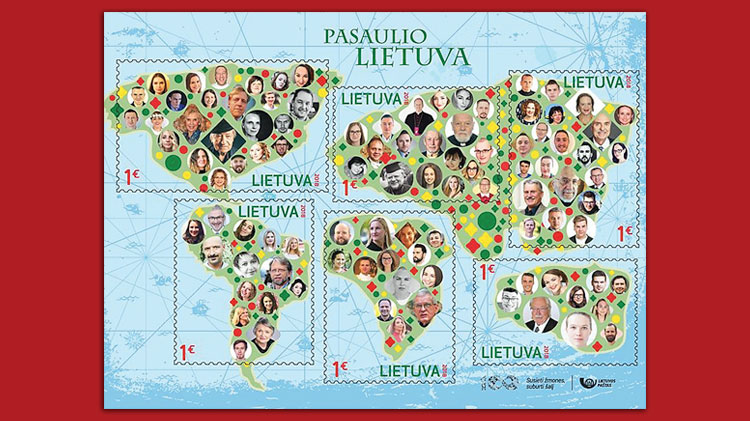 Faces of Lithuanians from around the world are pictured on a map on this pane of six stamps issued June 29.

A hundred living people are pictured on a pane of six postage stamps issued June 29 by Lithuanian Post (Lietuvos Pastas).

Asta Sungailiene, the CEO of Lithuanian Post, said that the pane “paid tribute to 100 people who live not only in Lithuania but also throughout the world and whose works bring together Lithuania of the world rather than commemorating some historical personalities. This is a special thanks for strengthening and fostering Lithuanianness and a reminder that the boundaries of our nation are much broader than those drawn on the map.”

A world map is pictured in the selvage of the pane, and the six €1 stamps show the basic shapes of six continents: North America, Europe, Asia, South America, Africa and Australia. The faces of the people are superimposed on the continents.

According to Lithuanian Post, 20 of the people were selected by a special commission to appear on the stamps. Among these are Olympic gold medalist swimmer Ruta Meilutyte, and Gintaras Grusas, the archbishop of Vilnius, who was born in Washington, D.C.

The other 80 people entered a contest held in conjunction with the project (www.4000000.lt) to unite 4 million Lithuanians around the world on July 6, Statehood Day, to sing the national anthem.