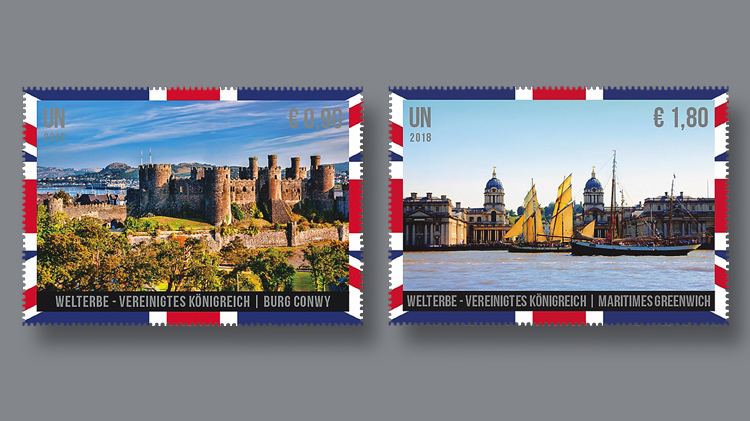 Conwy Castle in Wales and Greenwich in England are featured on the two stamps for use from the U.N. post office in Vienna, Austria. The castle is part of UNESCO’s Castles and Town Walls of King Edward in Gwynedd World Heritage Site. The Maritime Greenwich 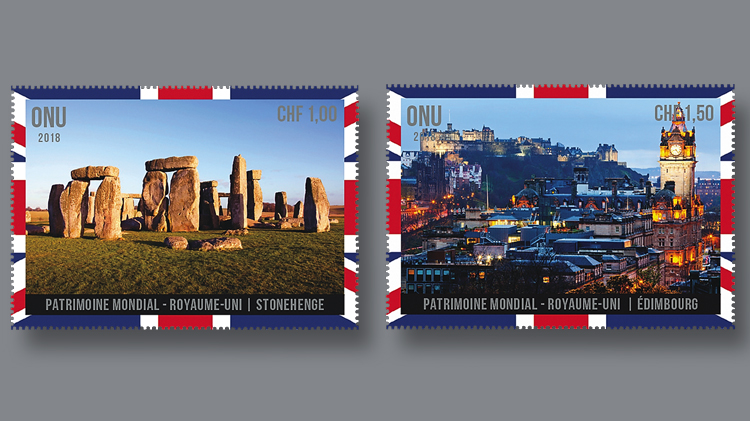 The stamps for use from the United Nation’s post office in Geneva, Switzerland, show Stonehenge and Edinburgh. These sites were inscribed on UNESCO’s World Heritage list in 1986 and 1995, respectively. 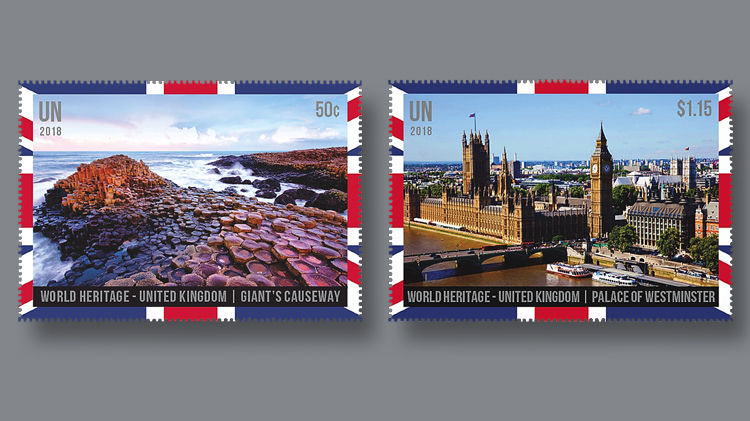 The United Nations Postal Administration is continuing its long-running World Heritage series Aug. 15 with stamps showing sites in the United Kingdom. The two stamps for use from the U.N. headquarters in New York City picture Giant’s Causeway in Northern
Previous
Next

The United Nations Postal Administration will add six stamps to its World Heritage series on Aug. 15.

The stamps, along with three prestige booklets, picture UNESCO World Heritage sites of the United Kingdom of Great Britain and Northern Ireland. Prestige booklets include text and illustrations in addition to stamps.

The website also said: “The most characteristic and unique feature of the site is the exposure of some 40,000 large, regularly shaped polygonal columns of basalt in perfect horizontal sections, forming a pavement. This dramatic sight has inspired legends of giants striding over the sea to Scotland. Celebrated in the arts and in science, it has been a visitor attraction for at least 300 years and has come to be regarded as a symbol for Northern Ireland.”

The Palace of Westminster, home to the two houses of the Parliament of the United Kingdom and the famous Big Ben, is pictured on the $1.15 stamp.

This palace along the Thames dates back to the 11th century when it served as a royal residence. Over the centuries, it has been damaged by fire many times and was essentially rebuilt after a fire in 1834. The oldest structure remaining in the complex is Westminster Hall constructed in 1097. The clock tower commonly called Big Ben (nicknamed after the massive bell inside the tower) dates from the 1850s.

In 1987, the Palace of Westminster, along with Westminster Abbey and St. Margaret’s Church, was added to the World Heritage List.

Another world-famous icon, Stonehenge, is featured on the 1fr stamp. This mysterious prehistoric site located on Salisbury plain in southern England is visited by more than 800,000 people each year.

The site was built in several stages, starting about 5,000 years ago. The stone circle itself was erected around 2500 B.C.

In 1986, Stonehenge along with Avebury in Wiltshire and other associated sites were placed on the World Heritage list. UNESCO said: “The two sanctuaries consist of circles of menhirs arranged in a pattern whose astronomical significance is still being explored. These holy places and the nearby Neolithic sites are an incomparable testimony to prehistoric times.”

The 1.50fr stamp depicts a view of the city of Edinburgh, which has served as the capital of Scotland since the 15th century.

Its 1995 listing as a World Heritage site mentions the city’s old and new towns. The terms are relative though as “New Town” was developed in the 18th century. Among the medieval structures in Old Town is Edinburgh Castle perched on Castle Rock.

Another medieval castle, Conwy in northern Wales, is highlighted on the €0.90 stamp. It was placed on the World Heritage list in 1986 with three other castles: Beaumaris, Caernarfon and Harlech.

UNESCO calls these four castles the “finest examples of late 13th century and early 14th century military architecture in Europe, as demonstrated through their completeness, pristine state, evidence for organized domestic space, and extraordinary repertory of their medieval architectural form.”

Commemorated on the €1.80 stamp is the UNESCO site of Maritime Greenwich. It was inscribed on the list in 1997 not only for its architecture but also because it “symbolises English artistic and scientific endeavour in the 17th and 18th centuries,” according to UNESCO.

The Visit Greenwich website (www.visitgreenwich.org.uk) said, “It was for over 250 years the national centre for research into astronomy, time-keeping and early Solar and magnetic astronomy. Its navigational and temporal role led to the Greenwich Meridian (Longitude 0°) being agreed as Prime Meridian of the World in 1884.”

Rorie Katz of the United Nations designed the stamps, using Almay stock photographs of the sites.

The photos shown on the stamps are framed by the red, white and blue colors of the United Kingdom’s flag, the Union Jack.

The quantities printed of the prestige booklets are 7,500 of the UNPA/New York booklet; 7,000 of the Geneva booklet; and 9,000 of the Vienna booklet. The covers show the Palace of Westminster, Edinburgh and Greenwich, respectively.