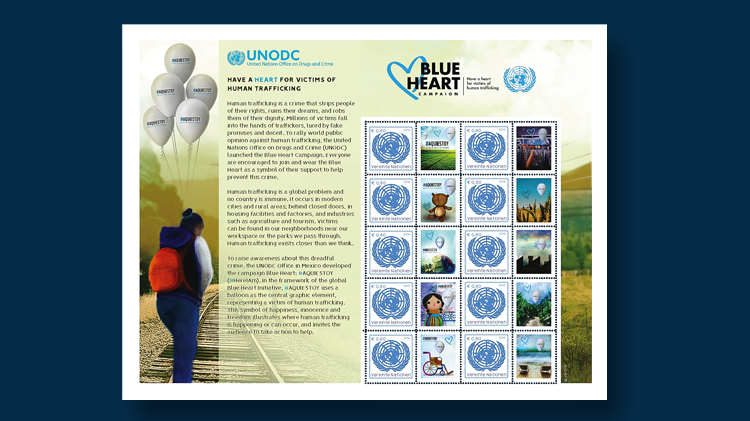 The United Nations Postal Administration is issuing a pane of stamps and labels July 30 for the World Day Against Trafficking in Persons.

The United Nations Postal Administration is issuing a pane of 10 stamps and labels July 30 to bring attention to the World Day Against Trafficking in Persons. This pane also brings awareness to the smuggling of migrants and to the Blue Heart Campaign against Human Trafficking.

Launched in 2008 by the United Nations Office on Drugs and Crime, the Blue Heart campaign is “a global awareness raising initiative to fight human trafficking and its impact on society,” according to the website www.unodc.org/blueheart.

Mexico was the first country to initiate its own national Blue Heart campaign, doing so in 2010.

In the April 10, 2010, press release about Mexico’s Blue Heart campaign, the United Nations said: “More than 2.4 million people — up to 80 percent women and girls — are currently being exploited as victims of human trafficking, either for sexual or labour exploitation … Other forms of human trafficking include domestic servitude, the removal of organs and the exploitation of children.”

The Blue Heart campaign predates the World Day Against Trafficking in Persons, which was established by the U.N. General Assembly in 2013 to “raise awareness of the situation of victims of human trafficking and for the promotion and protection of their rights.” It is observed annually on July 30.

The stamps are denominated €0.80 for use from the U.N. post office at the Vienna International Center in Vienna, Austria.

The design depicts the U.N. emblem in blue with the denomination in the upper left corner, the “2018” in the upper right, and the United Nations name in German “Vereinte Nationen” below the emblem.

Each of the 10 labels that are se-tenant (side-by-side) with the stamps shows a different design reflecting Mexico’s Blue Heart campaign with the hashtag AQUIESTOY (Here I Am). Each design includes a balloon with the hashtag and a symbolic blue heart.

Among the other items pictured on the labels are a teddy bear, backpacks and hiking boots, a doll, a wheelchair, a tractor and a harp. Agriculture, city and beach scenes also are shown.

Emblems, images and text are included in the selvage. For example, above the stamps and labels are the emblems of the Blue Heart campaign and the United Nations with the slogan “Have a heart for victims of human trafficking” between them.

The large image on the left side of the pane shows a young woman with a backpack walking on a railroad track. A bunch of balloons with the aforementioned hashtag also is pictured.

Three paragraphs of text between this image and the stamps provide details on human trafficking and the Blue Heart campaign.

The last paragraph explains the hashtag and balloons: “To raise awareness about this dreadful crime, the UNODC Office in Mexico developed the campaign Blue Heart: #AQUIESTOY (#HereIAm). In the framework of the global Blue Heart Initiative, #AQUIESTOY uses a balloon as the central graphic element, representing a victim of human trafficking. This symbol of happiness, innocence and freedom illustrates where human trafficking is happening or can occur, and invites the audience to take action to help.”