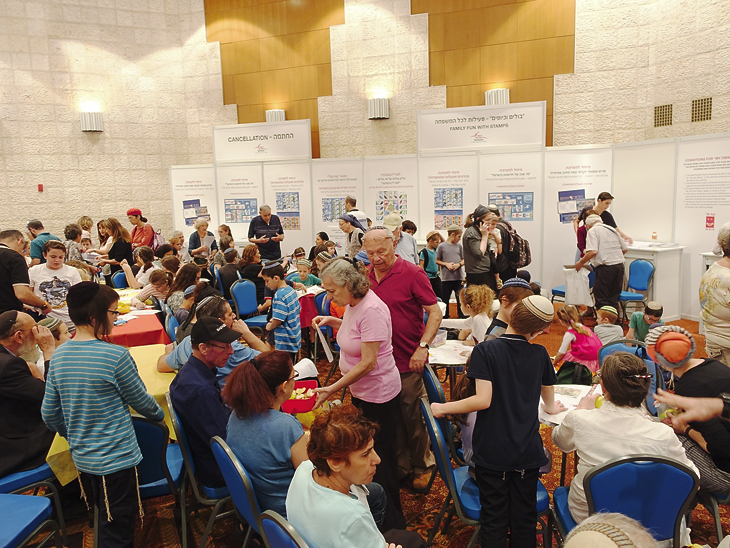 The “Family Fun with Stamps” area buzzing with activity at the May international exhibition in Jerusalem. Photo by Alexander Haimann. 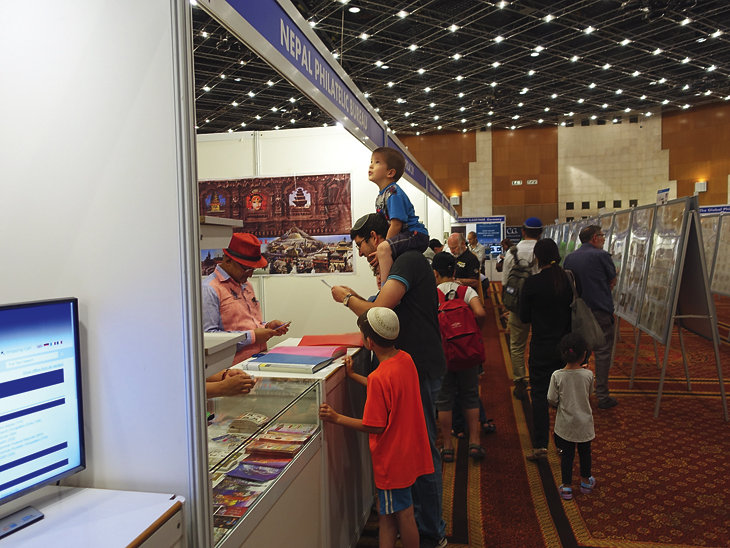 Family at a dealer booth at the World Stamp Championship Israel 2018 show. Photo by Alexander Haimann. 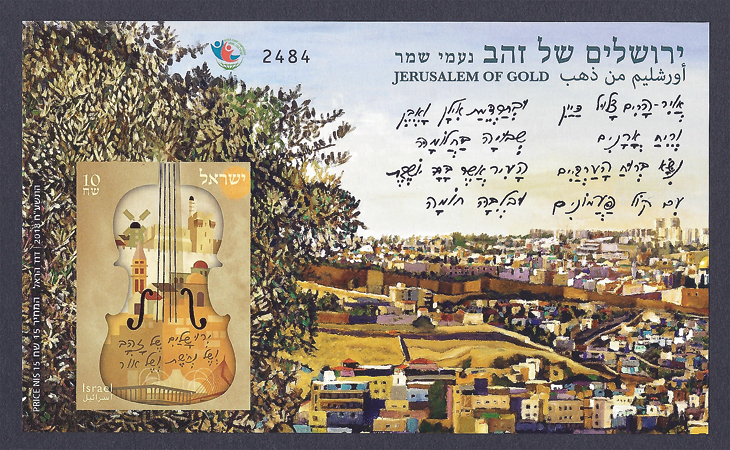 This imperforate Jerusalem of Gold — Naomi Shemer souvenir sheet was included in the official exhibition catalog for World Stamp Championship Israel 2018. Each sheet is individually numbered between 1 and 3,000. This souvenir sheet has number 2,484.
Previous
Next

This event continued the tradition observed by many countries to host an international philatelic event every 10 years. The previous international exhibition in Israel took place in Tel Aviv in 2008.

The 2018 show coincided with the 70th anniversary of the founding of the State of Israel and the release of Israel’s first postage stamps, the 1948 Doar Ivri issue.

The show’s beautiful and spacious venue, the Jerusalem International Convention Center is located just west of the Old City.

Twenty-one auction houses, dealers and postal agencies had booths at the exhibition. These booths were in two back-to-back rows in the center of the main room with exhibit frames on both sides.

Collectors from more than 50 countries submitted exhibits, with more than 1,000 frames of material on display.

The official exhibition catalog included a special imperforate souvenir sheet of the Jerusalem of Gold — Naomi Shemer stamp released on the opening day of the show, May 27. Each sheet is numbered between 1 and 3,000.

Most collectors that attend shows in the United States would recognize the Israel 2018 exhibition’s familiar buzz of collectors perusing dealers’ stocks and studying the wide range of material in the exhibit frames.

However, one dynamic of the show was dramatically different than U.S. stamp show experiences — the continuous presence of children and young families at the exhibition throughout the week.

The aisles next to the dealer booths often were packed with these families exploring every facet of the show.

On most days, the exhibition was open from noon to 8 p.m., and the children with their parents stayed to the end of each day.

Jorge Castillo, owner of Castlerock Stamps and a booth holder at Israel 2018, is a frequent presence at exhibitions around the world, including at World Stamp Show–NY 2016.

Castillo said about the large proportion of the attendees at the Israel show being young families and children, “The biggest difference is that they are coming and buying stamps!”

“The purchases are very modest,” he said, “but that’s perfectly fine — they are buying and collecting.”

Castillo said that he often sees school groups and young families at U.S. stamp shows, but rarely are they coming up to dealer tables and looking through material.

Another person at the show estimated that the attendees under age 30 outnumbered those over age 30 for many hours each day.

Based on my observations of the crowds during three days of the exhibition, this estimation was not an exaggeration.

Israel 2018 organized scheduled guided tours for attendees to not only see different parts of the exhibition but also to learn about the origin of stamps and postal history. This was accomplished through a series of well-placed single-frame exhibits that helped to illustrate the narrative of the overall tour.

Nothing is scheduled yet for Israel’s next once-a-decade international exhibition, but it would be worth penciling into your calendar for May 2028.