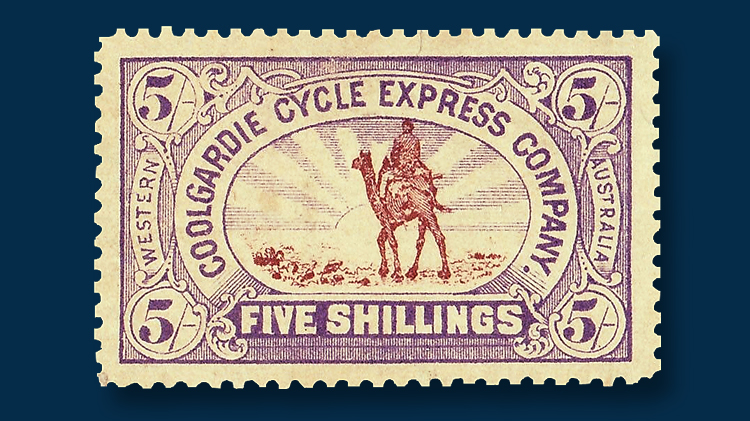 The 1896 Western Australia - Coolgardie Cycle Express Co. Camel and Rider local post stamps are in demand and a good buy in very fine grade and unused original gum condition in the $350-to-$400 price range.

Back in the gold rush days, food, water and other basic supplies were extremely limited. The miners’ needs were supplied by Afghan cameleers (Muslim camel drovers, though not all from Afghanistan), who formed a lifeline of supply with their ships of the desert.

There was no government postal service in Coolgardie. The nearest post office was more than 100 miles away at Southern Cross.

In 1894, to meet the postal needs of the miners, organizers developed a private delivery service operated mostly by bicycle. The Coolgardie Cycle Express Co. delivered the mail until 1896, when the Western Australian postal service began servicing the area.

The first stamps issued for the service were rather crudely designed blue 1-shilling and 2sh, 6-penny Bicycle stamps.

In June 1896, three more stamps were produced. These stamps, denominated 6d, 2sh and 5sh, were much more slickly produced and picture a camel and rider in the design, as some of the mail was now carried by camel.

The Camel and Rider stamps were only in use for a short time before the private delivery service was replaced by the government postal service. The remaindered stock was sold to stamp dealers and collectors.

This local post issue is popular with a broad swath of Australia, British Empire, cinderella and topical collectors. Prices vary widely, but an unused original gum set in the grade of very fine is a good buy in the $350-to-$400 price range.