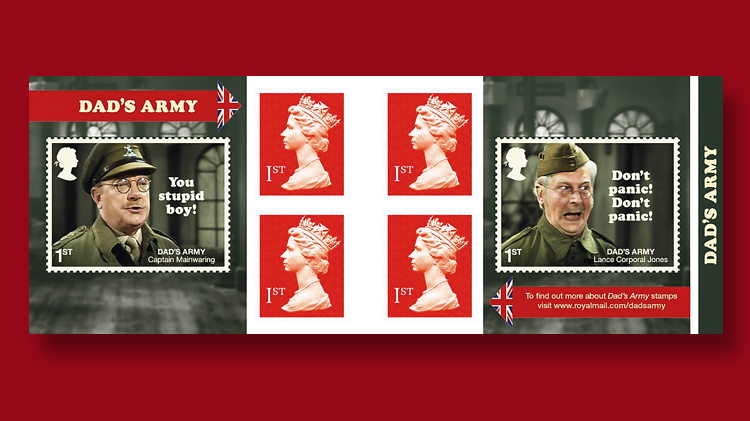 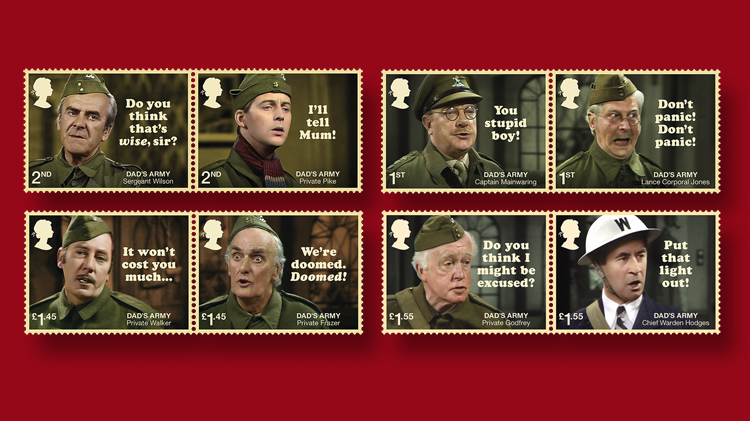 Royal Mail marks the 50th anniversary of an enduring and beloved British Broadcasting Corp. sitcom with a set of eight stamps.

The eight Dad’s Army stamps arrive June 26 in four horizontal se-tenant (side-by-side) pairs, featuring photos of the show’s main characters along with their most famous catchphrases.

Written by Jimmy Perry and David Croft, Dad’s Army is about the antics of a British Home Guard unit during World War II in the fictional town of Walmington-on-Sea on the south coast of England.

It aired on the BBC from 1968 to 1977 (80 episodes). There was also a radio version and a feature film, and the show is still repeated in certain markets worldwide.

“Few TV comedies have inspired as much affection, or given us as many catchphrases, as Dad’s Army,” Royal Mail’s Philip Parker said. “On its 50th birthday we hope these new stamps will raise plenty of smiles.”

Ian Lavender portrayed Private Pike and is the only surviving member of the Home Guard actors. He said being featured on the Royal Mail’s tribute to Dad’s Army is “overwhelming.”

“When you’re young you may dream of many things but one never thinks there is a possibility of being on a stamp,” he said.

The nondenominated second-class stamp pair features Sergeant Wilson and Lavender’s character Private Pike with their lines, “Do you think that is wise sir?” and “I’ll tell Mum!”, respectively.

When asked by Royal Mail if he would be sending more letters now that he was pictured on a stamp, Lavender replied, “There might be a lot of Christmas cards going out with second-class stamps on them!”

He added: “Funnily enough, we live in the old Post Office in our village and although it has been closed and stamps are now sold in our local grocery store, people still knock on the door to buy stamps despite the fact we have changed it into a house! The shop windows have gone and we have ordinary windows but we still have the post box outside and notices on the wall saying ‘telegraphic office’. You can, however, tell it is no longer a shop. I have been given a big version of the stamp and once they are released, I might put it up in the window with a sign saying ‘the post office is around the corner’!”

Private Godfrey (“Do you think I might be excused?”) and Chief Warden Hodges (“Put that light out!”) are shown on the £1.55 pair.

Each stamp measures 41 millimeters by 30mm and is perforated gauge 14.5 by 14. They were printed by International Security Printers by offset lithography in sheets of 60 and sold in panes of 30 at most postal outlets. The sheet stamps are moisture-activated.

A stamp booklet includes self-adhesive versions of the two first-class stamps from the Dad’s Army set together with four first-class Machin definitives. International Security Printer printed the booklet by gravure.

The two first-class stamps also are produced in what Royal Mail calls a “generic sheet,” which includes 10 stamps (five of each design) and se-tenant labels featuring stills of some of the show’s most iconic scenes.

Other products for this set include first-day covers, eight postcards reproducing the designs of the stamps, and a presentation pack with profiles of the actors and insights into the show’s writers.