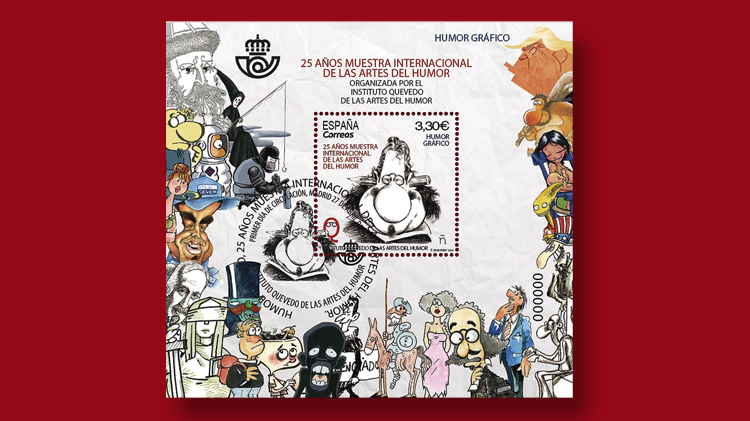 The selvage area of a Spanish souvenir sheet includes caricatures of President Donald Trump and Uncle Sam, among many others. Shown here with a first-day cancel, the sheet was issued April 27 in Spain’s Comics and Cartoons series. 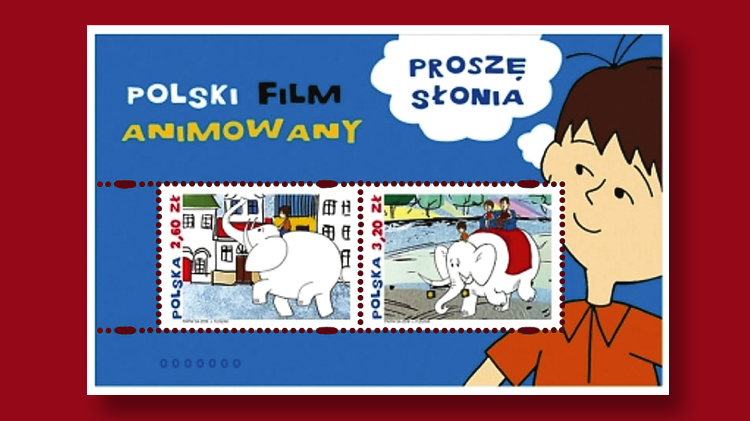 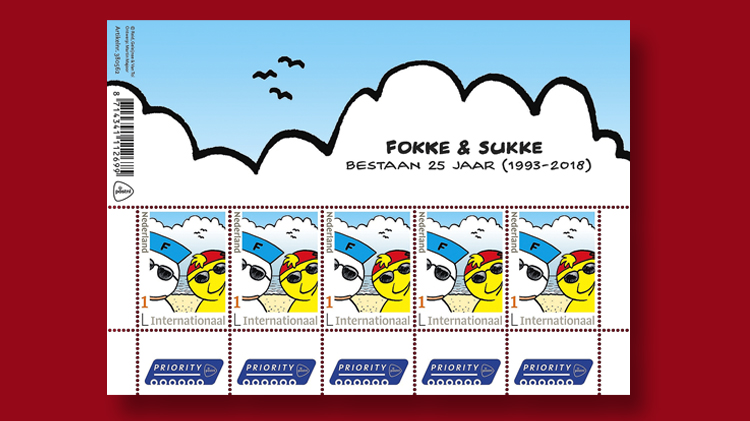 The Netherlands featured the comic strip Fokke & Sukke on stamps issued April 23 to introduce the new frames for personalized stamps. A pane of five international-rate stamps is shown. 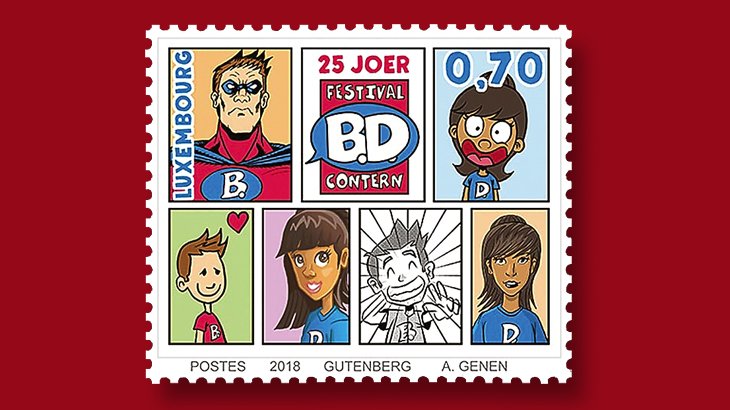 A new stamp from Luxembourg salutes the 25th anniversary of the Comic Book Festival in Contern. 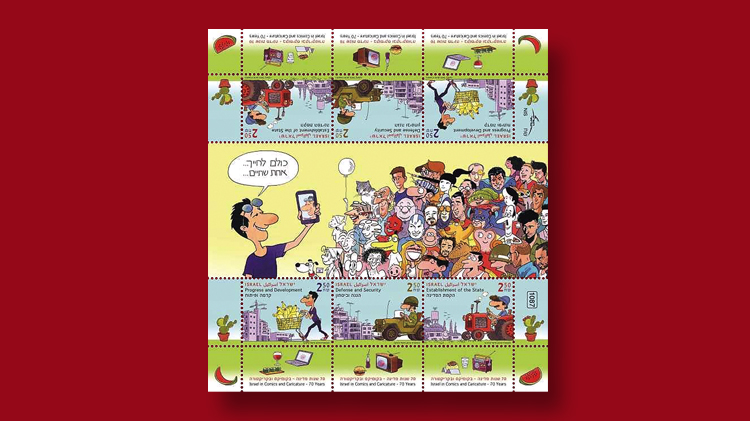 Israel’s 70-year history as a state is divided into three eras (establishment of the state, defense and security, and progress and development) on this pane of stamps featuring comics and caricatures. The tabs show items from the eras. 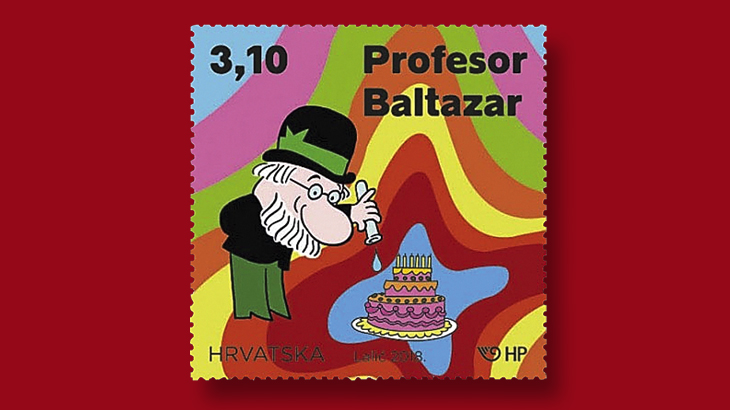 Croatia commemorates the 50th anniversary of the animated television series Professor Balthazar on this 3.10-kuna stamp issued May 3.
Previous
Next

New Stamps of the World - By Denise McCarty

Like the United States Postal Service with its new Scooby-Doo stamp, other countries are featuring their animated and cartoon characters on recent stamps.

For example, Croatia issued a 3.10-kuna stamp May 3 honoring the 50th anniversary of the animated television series Professor Balthazar, which originally aired in Croatia from 1968 to 1977.

The title character was created by Croatian animator Zlatko Grgic (1931-88).

Croatian Post described the professor as a “likeable scientist who resolves the problems his fellow citizens are facing with the assistance of a complex machine, but actually with a lot of imagination and positive energy.”

The Time Out website, a guide to art and entertainment in various locations, called him “Zagreb’s biggest cultural export,” as the series was popular in many other European countries as well as in Croatia. In the United States, it aired as part of ABC’s Curiosity Shop in the early 1970s and as part of Nickelodeon’s Pinwheel in the 1980s.

Croatia previously commemorated the animated series on a 1.40k stamp in its 1997 Motion Pictures Centennial issue (Scott 322b).

The new 3.10k stamp was designed by Alenka Lalic and printed in sheets of eight by AKD in Zagreb.

In this film based on a book by Ludwik Jerzy Kern, Dominic magically transforms from a small porcelain figurine, through vitamins fed to him by the boy Pinio, to a life-size white elephant.

The souvenir sheet is part of an annual series showcasing Poland’s animated films.

A series of souvenir sheets from Spain is dedicated to comics and cartoons. The latest sheet in the series, issued April 27, also commemorates the 25th annual International Comic Art Exhibition organized by the Quevedo Institute of Comic Arts.

The single 3.30 stamp in the sheet depicts a caricature of Spanish poet, writer and satirist Francisco de Quevedo y Villegas (1580-1645). Drawn by Ricardo Martinez, the caricature appeared on the cover of the March 1997 issue of the graphic humor magazine Quevedos, according to Spain’s post office.

Works of other artists are shown in the border surrounding the stamp, including David Garcia Vivancos’ caricature of President Donald Trump in the upper right.

A list of all of the artists represented on the sheet can be found in the philately section of Correos’ website.

Like Spain, Israel displayed the artwork of various comic artists and caricaturists on a recent issue.

This pane of six 2.50-shekel stamps (three different designs) was issued May 27 as part of the celebrations of the 70th anniversary of Israel’s independence.

The stamps are arranged in two se-tenant (side-by-side) strips of three with a large selvage area in the center showing a man taking a selfie with characters from various Israeli caricatures, comics and animated films.

The stamps represent different eras in the history of Israel, beginning with the establishment of the state on the stamp shown right-side up in the lower right of the sheet and upside-down in the upper left.

Writing in the new-issue announcement, Mordechai Naor said, “The first stamp takes us back to the ‘days of innocence,’ a time when the most popular vehicle was the tractor and agriculture was the top priority for Israel’s heads of state and the majority of its population.”

A military jeep replaces the tractor on the stamp representing the next phase, defense and security, of the mid-1960s through the mid-1980s.

For progress and development in the 1990s and early years of this century, the design depicts a man pushing a supermarket cart.

Additional items related to each era are depicted on the tabs (labels) attached to the stamps.

According to his biography on the website https://cartoonart.lu, Genen fell in love with American comics when he received his first Batman comic book at age 6.

Luxembourg’s Gutenberg AG printed this stamp by offset in sheets of 10 with a large decorative selvage with more artwork by Genen.

The Netherlands’ PostNL marked the 25th anniversary of a newspaper comic strip about a duck and a canary, Fokke & Sukke, on two stamps issued April 23 to introduce new frames for personalized stamps.

The stamps show different designs of Fokke and Sukke posing for selfies.