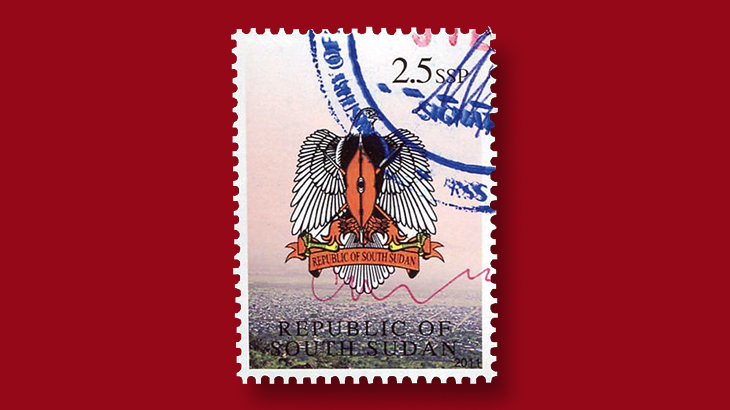 South Sudan in east central Africa is the world’s newest country. Predominantly Christian, it gained its independence from predominantly Muslim Sudan on July 9, 2011, after years of smoldering insurgent warfare, reprisals and atrocities. Civil war broke out after a failed attempted coup in 2013, and continues to this day largely along tribal lines.

An initial set of three stamps was prepared for issuance on the first day of independence, July 9, 2011. The £1 Flag of South Sudan stamp and the £3.50 John Garang stamp (Scott 1-2) were issued, but the £2.50 Coat of Arms stamp was withdrawn before being issued.

However, the unissued stamp was affixed to some commercially prepared first-day covers that were prepared and sold abroad.

Also, canceled examples with postmarks dated as late as 2017 have turned up in the philatelic market. All of the examples we have seen are canceled.

Given the chaotic state of affairs in South Sudan, additional supplies of this stamp might be pressed into service or find their way into the philatelic market. However all regularly issued South Sudan stamps are hard to come by and more valuable than most contemporary issues.

This unissued $2.50 stamp is in strong demand and is selling in the $110-to-$165 price range. We think it is worth taking a chance on it, if you see it offered near the lower end of that price range. It may turn out to be the key item in a South Sudan collection.