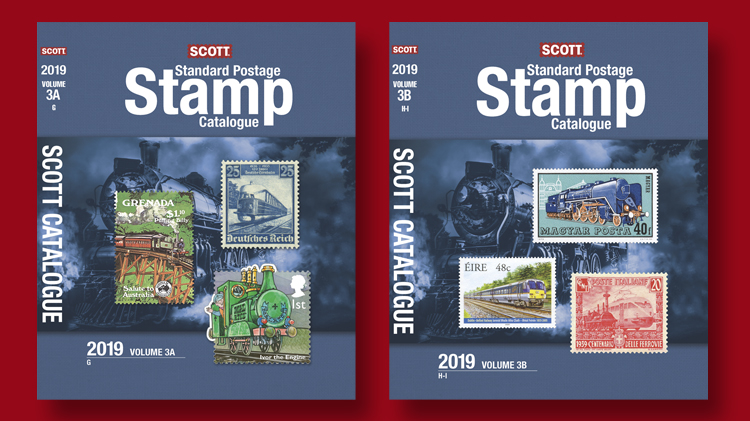 Collectors of Great Britain will want to scrutinize the postage, Machin head and booklets listings. An exhaustive review of these sections resulted in more than 9,300 value changes.

In the postage section, the editors started with the 1913 Britannia issue. Values are down, but not excessively so. One bright spot is an increase in values for used commemorative stamps issued from early 2001 through 2016, an acknowledgment that demand is on the rise and dealer stocks are not plentiful.

A complete, line-by-line review of the Isle of Man listings resulted in more than 3,500 value changes. Almost without exception, values are down, particularly for issues through the late 1980s. More modest declines are seen for stamps from about 1990 through 2015. Exceptions include self-adhesive stamps issued in booklet form and some souvenir sheets. The 2006 self-stick Christmas booklet panes (Scott 1178a and 1179a) jump from a combined $23.50 in 2018 to $35 this year.

Thirty-eight value changes were made to listings for the National Republic period of Georgia, a former province of the Russian Empire. Overall, the value changes reflect small increases. The set of 1923 handstamped surcharges on the 1922 Soviet Socialist Republic stamps (Scott 36-40) jumps from $38.25 unused to $44. The value for the set of five in used condition remains at $37.50.

Following a line-by-line review, Gilbert and Ellice Islands weighs in with more than 200 value changes. This group of islands in the Pacific is located northeast of Australia. Small increases occur among the classic issues (pre-1940), especially used values. The 1935 Silver Jubilee set of four stamps (Scott 33-36) moves up in value, from $31.50 unused to $36.80, and from $50 used to $67. The 1949 Universal Postal Union set of four (56-59) slides from $4.70 mint to $4.30, but jumps from $7.85 used to $13. The used values for both the Silver Jubilee set and the UPU set are in italics, meaning limited market data makes it difficult to value these sets in used condition. Declines in values are the norm for stamps issued from 1950 on.

A thorough vetting of Gold Coast resulted in almost 100 value changes: specifically, a mixture of advances and declines for this former British Crown colony that became the independent state of Ghana in 1957. Collectors will find more increases in values than decreases. Among the King George V issues, the 1921 £2 green and orange high-denomination stamp (Scott 95) rockets from $1,000 in used condition to $2,000. The value is in italics to indicate that this stamp is difficult to value in used condition.

Georgia: A horizontal pair, imperforate between has been added as Scott 54b for the 1923 red surcharged 350,000-ruble-on-3-kopeck stamp.

Great Britain: Scott 521b is newly assigned to the orange-omitted error of the 1967 1-shilling, 9-penny British Discoveries stamp. In this printing miscue, the head of Queen Elizabeth II is missing.

Greece: Thirty-five minor numbers were added to the listings for Greece, including pairs with one stamp without the surcharge, and surcharge varieties. Imperforate pairs have been added to the 1947-48 Return of the Dodecanese to Greece set (Scott 506-515).

In the Hong Kong listings, the editors completed a line-by-line review that yielded more than 1,650 value changes. This year, the focus was on postage issues from the mid-1970s to the present. For the most part, values for unused stamps show declines through the mid-1990s. Values for used high-denomination stamps, in contrast, show gains. Values for selected modern definitive sets were adjusted to better reflect market values for individual stamps within those sets. In some cases, the overall set totals did not change appreciably. In general, values for more recent issues rise 10 percent or somewhat more. A representative example is the 2003 Miniature Landscapes set of four (Scott 1040-1041), which moves from $4 in mint never-hinged condition and $3.50 in used condition in 2018 to $4.50 and $4, respectively, this year.

Somewhat more than 750 value changes are recorded for India. This year’s focus was on issues up to the mid-1960s. A mixture of increases and decreases is seen, with some robust upward adjustments for selected early classics. For example, the 1854 ½-anna Queen Victoria (Scott 1) advances from $1,200 unused in 2018 to $3,250 this year.

The editors resumed their comprehensive review of Israel begun last year. Picking up with issues of 1995, more than 1,700 value changes were recorded. Values are down 10 percent to 20 percent, but some increases are seen among more popular topicals and self-adhesive definitives. The 1998 Children’s Pets sheet of six doubles in value, from $2 mint and used last year to $4 both ways this year. Selected modern postage issues in imperforate form are now footnoted and valued.

Hungary: A scarce error of the 1888 5-kreuzer Crown of St. Stephen, with the “5” doubled and inverted, has been added as Scott 25a.

India: A small number of color varieties were added to listings of the classic period. New is Scott 15c, a yellow variety of the 1855 2-anna buff Diadem with Maltese Crosses. An orange variety of the 1865 2a brownish orange Diadem with Maltese Crosses enters the 2019 catalog as Scott 23c. The rare presentation booklet containing the 1948 Mahatma Gandhi set of four (Scott 203-206) with “Specimen” overprints is now footnoted with a value of $13,000. The error variety of the 1973 15-naye paise International Red Cross Centenary (Scott 373) with the red cross omitted also is newly footnoted, with a value of $25,000.

Italy: New enlarged images have been added for Italy Scott 93, 111 and 123 to make it easier for collectors to determine the correct Scott number for the original 1906 15-centesimo slate Victor Emmanuel III stamp (93) and the redrawn (111) and re-engraved (123) versions of this denomination.

Italy - Trieste: Several new images were added to the listings of Trieste Zone A in Vol. 3B of the 2018 Scott Standard catalog. These stamps bear the overprint “A.M.G./F.T.T.” and were issued jointly by the Allied Military Government of the United States and Great Britain following World War II, from 1947 through 1954. More than 30 new images have been added to Vol. 3B of the 2019 Scott Standard catalog.