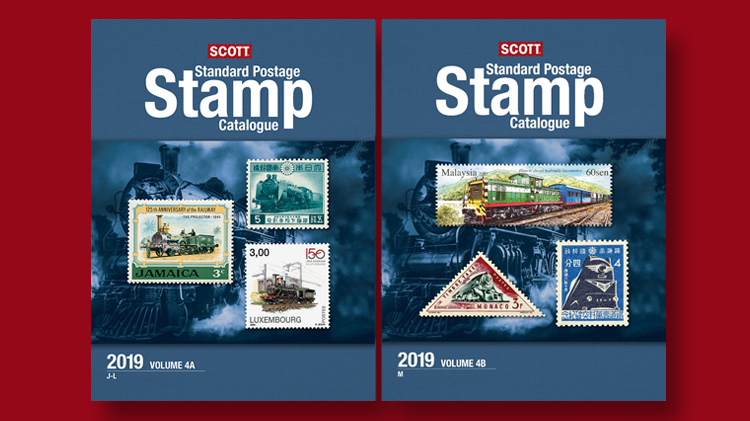 Volumes 4A and 4B of the 2019 Scott Standard Postage Stamp Catalogue are now available for purchase.

Among the exceptions to the increases in value are a few of the early issues, including the first issue, Japan Scott 1-6, which declines in value. The 1871 48-mon stamp (1) drops from $250 unused and used to $225 both ways. Scott 2-6 experience similar declines.

Scattered value changes were made from 1951 onward, reflecting a strong market for Japanese stamps.

Many footnoted values for stamps of Katanga with inverted overprints rose substantially this year. Be sure to give them a careful review if you collect this country.

Collectors of Kazakhstan will be pleased to see that country’s values on the rise. More than 920 changes were recorded, and the vast majority are increases of 10 percent or more. The more robust increases are seen among popular topicals such as fauna and Olympic sports. The 2005 Olympic Gold Medalists sheet of four (Scott 491) advances from $7.50 mint never-hinged and used in 2018 to $9 both ways in the 2019 catalog.

South Korea, beginning with United States military rule in 1946, is on the decline, with numerous decreases in values throughout. Among the exceptions is the iconic 1948 President Syngman Rhee stamp (Scott 90). This stamp moves from $375 in never-hinged condition to $450, from $200 unused to $260, and from $180 used to $200. Although many of the early souvenir sheets are on the decline, the 1957 Christmas and New Year imperforate souvenir sheets (265a-267a) increase from $625 each mint to $650.

Mostly decreases are found among the more than 875 value changes throughout the listings for the Democratic People’s Republic of Korea (North Korea).

The editors gave Kyrgyzstan a complete review, which resulted in more than 450 value changes. Overall, modest declines predominate, with some scattered increases. Among the Kyrgyz Express Post issues (found after the semipostal listings), increases are seen for the 2014 through early 2016 issues. The Wild Animals sheet of four (Scott 5) springs up, from $12 mint never-hinged and used in the 2018 catalog to $15 both ways this year.

A mixture of increases and decreases are spread throughout the listings in Latvia, resulting in more than 500 value changes. The editors did not see any significant movement in either direction. Fairly typical among recent issues is the 2012 Birds set of two (Scott 808-809), which moves up just 25¢ in mint and used condition, from $4.75 in 2018 to $5 this year.

Editorial enhancements for Vol. 4A

Jamaica: Scott 85a is newly assigned to the 3-shilling Monument to Sir Charles Metcalfe with the “C” of “CA” missing in error from the Multiple Crown and CA watermark.

Jordan: Among the new images in this volume are images showing the differences between the bars on the normal 1½-millimeter spacing and the narrow ½mm spacing for Jordan’s 1953 overprinted stamps (Scott 297-305). The bars were overprinted on Jordan’s 1952 Relief Map stamps (270-278) issued to honor the unity of Jordan April 24, 1950. The values for the overprinted set remains unchanged at $21.75 mint and $11.95 used.

In Vol. 4B of the 2019 Scott Standard catalog, more than 950 value changes are recorded for Macedonia. There are no major fluctuations to note, but most of the changes are increases of 10 percent or so. Fairly typical is the 2000 Birds set of four (Scott 195-198), which moves from $3 mint never-hinged and used in the 2018 catalog to $4 both ways this year. Proportionately larger increases are seen for the postal tax stamps. Values also swing upward for a few souvenir sheet varieties described in footnotes.

For many countries, discernable patterns often emerge that simplify the valuing process. Such was not the case this year among the more than 825 value changes made in Moldova. For the most part, values soften for stamps issued through 1999, and values rise for stamps after that. It was a challenge for the editors to determine what the market was doing because the percentage change for the new values often varied, sometimes noticeably, from one issue to the next.

A line-by-line review of modern and back-of-the-book issues for Montenegro resulted in more than 570 value changes. Among the postage issues, modest increases predominate for stamps issued from 2005 through 2009. A mixture of decreases and increases are seen for stamps issued during 2010-15. Among back-of-the-book issues, values were updated for almost all Italian and German occupation issues.

Values for stamps issued from 1970 through the 1990s show an overall softness in the market, but other years see more increases than decreases.

Editorial enhancements for Vol. 4B

Montenegro: Editorial notes have been installed at the beginning of the listings for Italian and German occupation issues to alert catalog users that values for used stamps are for postally used examples. Be aware that canceled-to-order stamps will sell for substantially less.

Mozambique: Two new major numbers were added to the listings. A large 30-metical imperforate stamp measuring 89 millimeters by 85mm enters the catalog as Scott 695A. This stamp features a frog (Ptychadena porosissima). The number 965B has been assigned to a souvenir sheet issued Oct. 25, 1985, for the Italia 85 philatelic exhibition in Rome. This souvenir sheet has simulated perforations.