Malawi bird stamp set a bargain if you find one 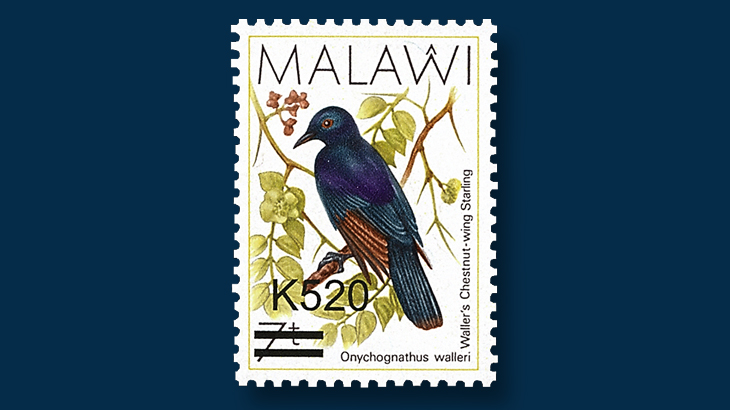 The 2016 Malawi set of two overprinted and surcharged Bird stamps (Scott 840-841) is in demand and selling for multiples of the 2018 Scott Standard Postage Stamp Catalogue value.

Malawi is a relatively small, landlocked country in southeast Africa wedged in between Zambia, Tanzania and Mozambique. Before independence in 1964, it was the British Nyasaland Protectorate.

Agriculture remains the mainstay of the economy of Malawi, and more than 80 percent of its population of 18 million is rural and engaged in agriculture.

Malawi has issued several attractive sets of stamps depicting birds that are in great demand from topical collectors.

However, the supply generally exceeds the demand, and most of these stamps sell at a discount from the 2018 Scott Standard Postage Stamp Catalogue values. An exception is the set of two overprinted and surcharged Bird stamps (Scott 840-841) issued Nov. 7, 2016.

The Scott Standard catalog values the set in both mint never-hinged condition and used condition at $3.75. The set is currently selling for as much as $15.

If you find a set priced at the Scott values, it would be a real bargain. The set is a very good buy at up to $10.