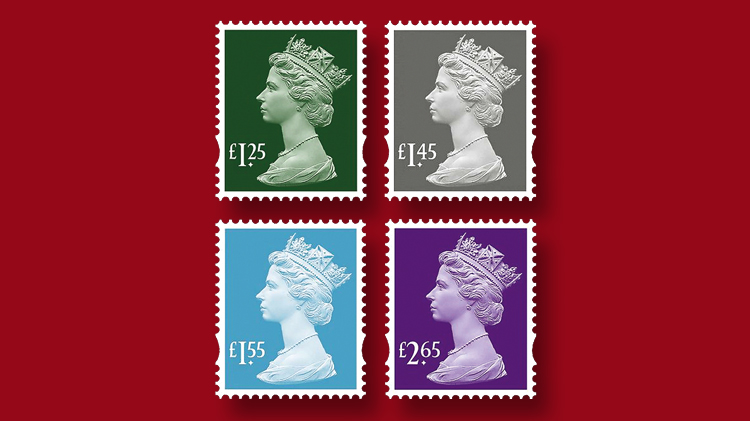 Four of the stamps are Machins featuring the bas-relief portrait of Queen Elizabeth II by Arnold Machin. This portrait has been used on Britain’s stamps since 1967.

The other 16 are country definitives. Also known as regional stamps, they are issued for England, Northern Ireland, Scotland and Wales. They are valid for postage throughout the United Kingdom.

Four of the new country definitives (one for each region) are denominated £1.25, and another four are denomination £1.45.

The others are nondenominated paying the domestic first-class (67p) or second-class rate (58p).

All of the country stamps feature the same designs that have been used for several years. Royal Mail reports that the new versions of the nondenominated country stamps were issued to standardize the “typographical styling across this series and bring it in line with the current Machin Definitive.”

International Security Printers printed the self-adhesive Machins by gravure in sheets of 25.

The country definitives have moisture-activated gum. International Security Printers printed them by lithography in sheets of 25 for the stamps with denominations and sheets of 50 for the nondenominated stamps.