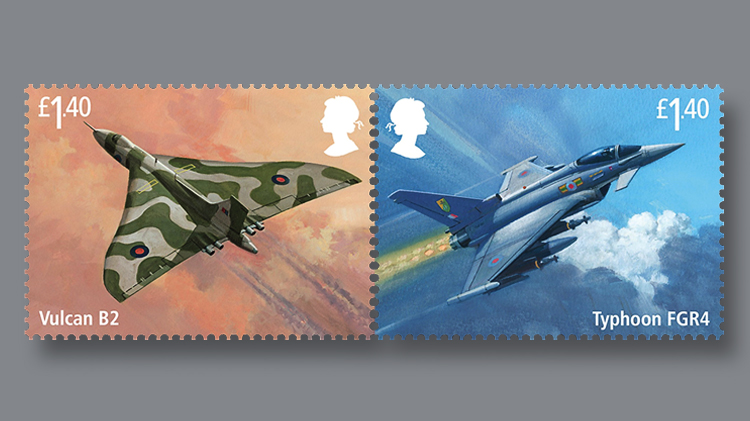 The Vulcan B2 and Typhoon FGR4 are illustrated on the pair of £1.40 stamps. 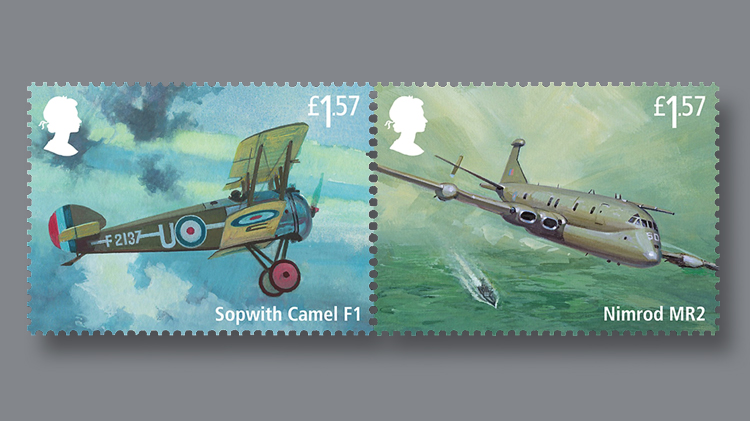 Depicted on the £1.57 pair are the Sopwith Camel F1 and Nimrod MR2. 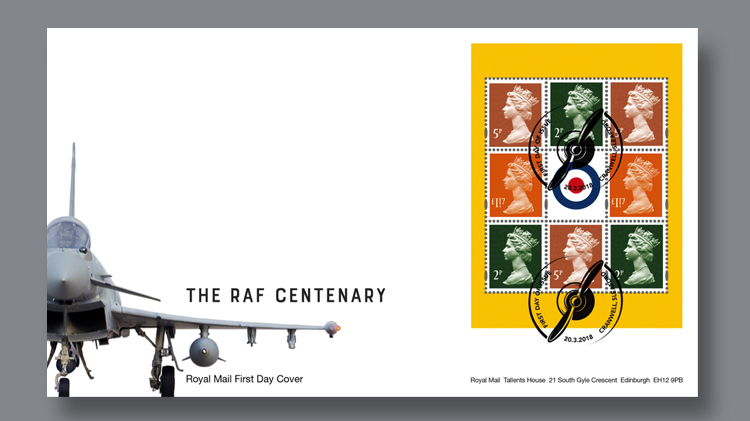 One of Royal Mail’s first-day covers for the RAF Centenary issue is franked with a pane of Machin definitives from the prestige booklet. 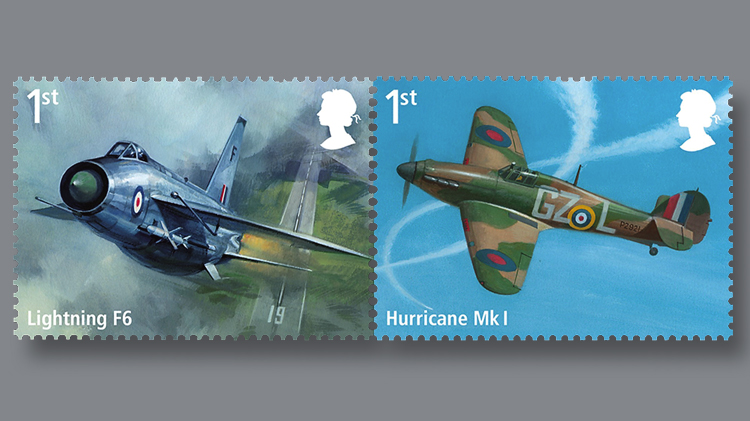 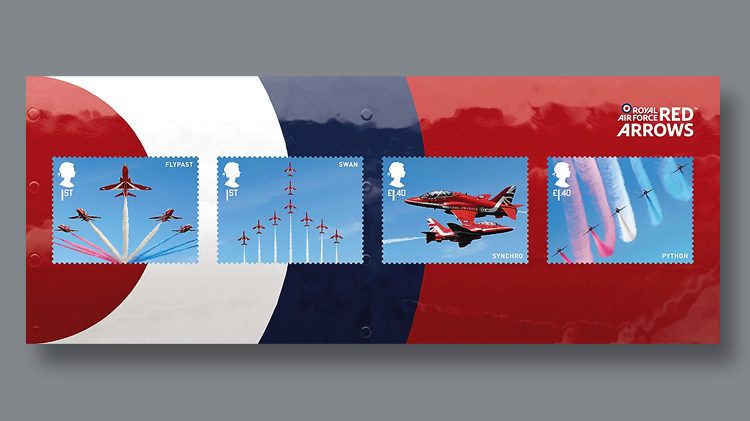 The Royal Air Force, the United Kingdom’s aerial warfare organization, was born when the Royal Flying Corps merged with the Royal Naval Air Service on April 1,1918.

A prestige booklet contains all 10 new stamps, Queen Elizabeth II Machin definitives, stamps from a 2015 issue, plus text and images related to the RAF.

The first two stamps in the se-tenant pairs are nondenominated, each with a “1st” inscription indicating that they pay the basic first-class domestic letter rate (67 pence as of March 26; 65p on the day the stamps were issued).

The designs show the Lightning F6 and Hurricane Mk I. Royal Mail said of these two aircraft:

“Lightning is touted as being the fastest British-made fighter of all time, and in 1959 it was the RAF’s first supersonic aircraft. There’s no doubt, this fighter had power, with its two Rolls Royce engines enabling takeoff and rate of climb faster than any other jet. Later versions could reach speeds of twice the speed of sound. Lightning served as the RAF’s main interceptor for 20 years.

“The Hurricane is a single-seat fighter credited with winning the Battle of Britain and attaining more than half of the German losses. Hurricanes were a major player during the Dunkirk evacuation and saw action in the defence of Malta, North Africa and the Far East. The craft was also the RAF’s chief night fighter facing German bombing raids in 1941 and 1942.”

The se-tenant pair of £1.40 stamps showcase the Vulcan B2 and Typhoon FGR4. These stamps paid an international mail rate for letters up to 20 grams when they were issued; that rate increased to £1.45 on March 26. Under the new rate structure, £1.40 is the rate for domestic large letters weighing up to 250 grams.

Royal Mail described Vulcan B2: “This iconic delta wing bomber was active from 1956 to 1984, with the more powerful B2 variant entering the service in 1960. Designed as a high-altitude bomber, it was part of the V-force made to carry Britain’s nuclear deterrent. When the Royal Navy submarines began handling nuclear deterrent in 1969, the Vulcan’s role shifted to tactical bomber. It was called into action in the Falklands Conflict of 1982.”

Royal Mail called the Typhoon FGR4 a state-of-the-art multi-role fighter, adding that is the RAF’s main aircraft in service today.

The Sopwith Camel F1 and the Nimrod MR2 are pictured on the pair of £1.57 stamps. From the March 20 issue date through March 26, these stamps met the rate for letters to Europe up to 100 grams. The new rate for this service has been decreased to £1.55.

Introduced in 1917, the Sopwith Camel F1 is the oldest plane featured in the stamp set.

Royal Mail said of this single-seat biplane fighter: “It was a complicated machine to fly, but it still became the best-known and most successful Allied WWI fighter and scout aircraft. Sopwith Camel pilots reportedly defeated 1,294 enemy aircraft in the air, but it was also triumphant on the ground. Camels also played a role in home defense, protecting cities from Zeppelin raids.

“With sophisticated radar and electronic surveillance equipment in the extended nose and tail, the Nimrod was used for maritime patrol and anti-submarine roles starting in 1969,” Royal Mail said.

“The upgraded MR2 entered service in 1979 and was deployed in the Falklands Conflict and in the Gulf War. Its enhanced capabilities also permitted search and rescue operations. The Nimrod was retired in 2010.”

International Security Printers printed the stamps in sheets of 60, sold in panes of 30 at most postal outlets.

Two of the stamps in the souvenir sheet are nondenominated first-class stamps, and the other two are each denominated £1.40. Starting on the left, the designs depict photographs of the RAF Red Arrows team in full flight during four formations: flypast, swan, synchro and python.

The Red Arrows have been displaying since 1965.

The website of the RAF said: “Flying distinctive Hawk fast-jets, the team is made up of pilots, engineers and essential support staff with frontline, operational experience. Together, they demonstrate the excellence and capabilities of the Royal Air Force and the Service’s skilled, talented people.”

Turner Duckworth designed the souvenir sheet, using photographs from various sources. The sheet measures 192mm by 74mm, and the individual stamps are 41mm by 30mm perforated gauge 14.5 by 14.

Three designs from the 2015 Battle of Britain 75th Anniversary souvenir sheet are repeated in a block of four on one pane: Pilots scramble to their Hurricanes (Scott 3416a), two examples of Supermarine Spitfires on patrol (3416b), and one Armorer replaces ammunition boxes (3416c). All are nondenominated, paying the first-class rate.

The Machin pane includes eight stamps and a se-tenant label: three each 2p and 5p, and two £1.17. The label shows the RAF roundel.

Another pane contains the four stamps from the Red Arrows souvenir sheet in a se-tenant block.

The 26-page prestige booklet also includes “photographs, illustrations, facts and stats relating to the RAF from its birth to the modern day,” according to the Royal Mail.

A second retail booklet scheduled to be issued May 11 will contain stamps featuring the Red Arrows.

For this RAF Centenary issue, Royal Mail also offered first-day covers, 11 postcards reproducing the designs of the stamps and the souvenir sheet, a presentation pack and more.