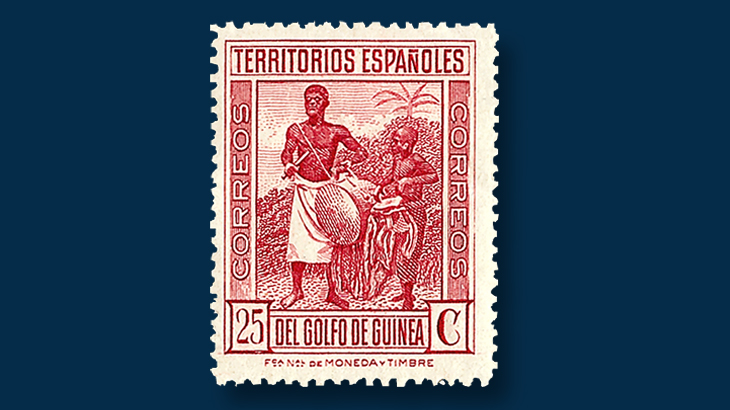 The Spanish Guinea 1931 engraved set of 14 pictorial definitives (Scott 220-233) is popular with collectors of classic stamps as well as with Spain and colonies collectors.

Colonial stamp issues are very popular with classic stamp collectors. The beautifully engraved designs, brilliant colors, and nostalgia for youthful collecting all combine to put them top of the list.

Spain had a great empire in the 19th and 20th centuries. Spanish Guinea was one of its more obscure possessions. The colony comprised a small holding named Rio Muni in West Africa, which was wedged between Cameroon and Gabon and the islands of Elobey, Annobon and Corisco in the Gulf of Guinea.

The colony gained independence as Equatorial Guinea in 1968. It is the only country in Africa whose official language is Spanish.

The colony issued its first stamps in 1902. At times, separate stamps were issued for Rio Muni and for Elobey, Annobon and Corisco. Spanish Guinea issues continued to be produced through 1959.

Many of the earlier stamp issues are quite pricey, but most later issues are within the range of most collectors. A good set to look for is the 1931 engraved set of 14 pictorial definitives (Scott 220-233). The designs depict a porter, drummers, and King Alfonso XIII and Queen Victoria of Spain.

You can probably find the set in unused hinged condition at a bit less than Scott catalog value, but you would likely have to pay full catalog for a set in mint never-hinged condition.