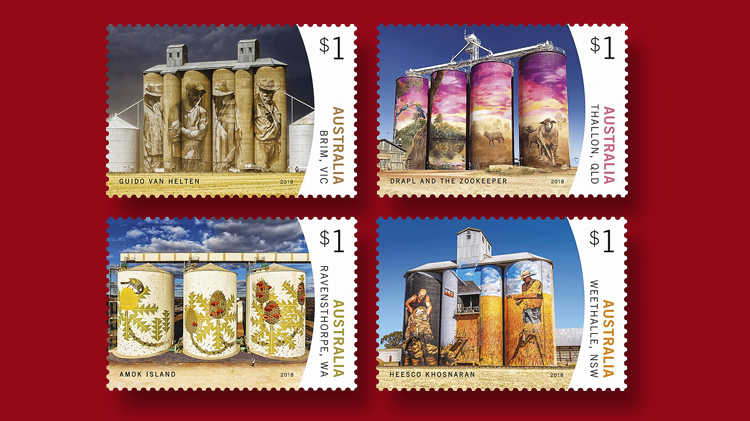 Australia celebrates a new form of art, silo art, on a set of four $1 domestic-rate commemorative stamps issued May 21.

Many styles and forms of art, from prehistoric times to today’s street art, have been pictured on stamps, but Australia Post is the first to dedicate a set of stamps to silo art.

The four $1 domestic-rate stamps were issued May 21.

In announcing the stamps, Michael Zsolt, Australia Post’s philatelic manager, said: “Silo art projects have been appearing across Australia since 2015 and are a magnificent symbol of the local people, natural environment, history and industries that are at the heart of these rural communities.”

“The remarkable painted grain silos have revitalised the local towns, many of which have suffered from drought or population attrition. These murals have put these small country towns firmly on the national and international map, attracting an increasing number of visitors.”

Each stamp depicts a photograph of a group of painted silos and also includes the artist’s name.

The artwork on the almost 100-foot tall silos took just three weeks to complete, according to Australian Post, and led to the establishment of the Wimmera-Mallee Silo Art Trail. In turn, this art trail brought many tourists to the region.

Two street artists known as Drapl (Travis Vinson) and the Zookeeper (Joel Fergie) were inspired by the local landscape for their 2017 The Watering Hole silo mural at Thallon, Queensland. Birds, sheep, trees and the Moonie River are pictured against a sunset background.

According to the report by Victoria Laurie in the newspaper The Australian (Oct. 18, 2016), the artist “spent 31 days aloft in a cherry-picker — and used 338 litres [89 gallons] of paint” in completing the mural.

Janet Boschen designed the stamps. EGO printed them by offset in a variety of formats, including sheets of 50, booklets of 10, and a souvenir sheet with the four designs se-tenant (side-by-side).