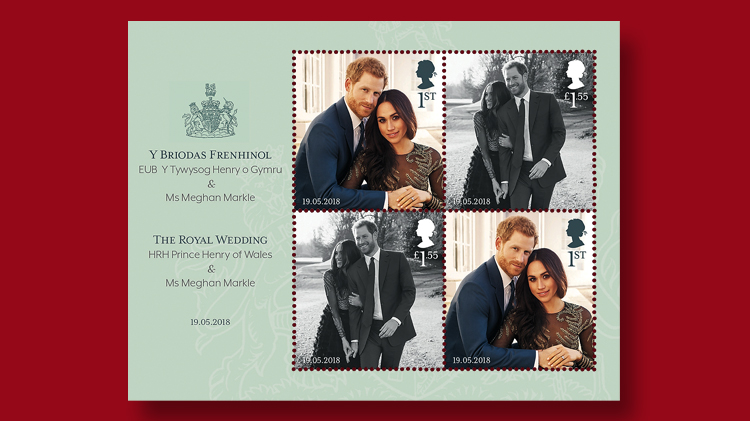 A souvenir sheet prepared by Great Britain’s Royal Mail celebrates the May 19 wedding of Prince Harry and Meghan Markle. The young couple are featured on four stamps with two different designs showing photographs taken in 2017 for their engagement.

Great Britain’s Royal Mail has revealed a four-stamp souvenir sheet celebrating the May 19 royal wedding of Prince Henry of Wales and Meghan Markle.

The image of the souvenir sheet was provided just days before the wedding of the prince and his American actress fiancee at St. George’s Chapel in Windsor Castle.

The prince, known familiarly as Prince Harry, is the younger of the two sons of Prince Charles and Diana, Princess of Wales, and the grandson of Queen Elizabeth II.

The wedding day, May 19, is also the issue date for the stamps.

The four perforated stamps on the souvenir sheet consist of two designs alternating and each appearing twice. The first of these is a nondenominated (67-penny) first class stamp with a formal color photograph of the couple. The wedding date appears in the lower left corner in European style as 19.05.2018.

The second design is a more casual black-and-white photograph of the couple walking outdoors and smiling broadly, with Markle holding onto the prince’s right arm. The second stamp is denominated £1.55, which fulfills the letter rate to destinations within Europe for mail up to and including 100 grams (approximately 3.5 ounces).

Both images of the couple are official engagement photographs taken by Alexi Lubomirski at Frogmore House, Windsor, in December 2017, according to the Royal Mail press office.

The souvenir sheet selvage is a pale green, and the larger margin on the left edge is topped in darker green with the prince’s coat of arms. The arms include a lion at left, a unicorn at right and additional symbols derived from both his mother’s Spencer family arms and his father’s royal family arms.

Text below the arms imprint is written first in the Welsh language and secondly in English, conveying the message “The Royal Wedding HRH Prince Henry of Wales & Ms. Meghan Markle 19.05.2018.”

A pale drop-out design showing an enlarged detail of the prince’s coat of arms appears behind the selvage text.

That earlier royal wedding issue also comprised four stamps with two designs picturing the couple, and selvage at left bearing royal arms and inscriptions in both Welsh and English.

Prince Harry, born Sept. 15, 1984, is currently sixth in the line of succession to the British throne following his father, Prince Charles; his brother, Prince William; and his brother’s children, Prince George, Princess Charlotte and Prince Louis.

Prince Harry proposed to Markle in London about a year and a half after they first met and began dating. Their engagement was announced Nov. 27, 2017.

Markle was born Aug. 4, 1981, in Los Angeles, Calif. Her father was a television lighting director who met her mother at the studio where she worked. Now divorced, both plan to participate in the upcoming wedding, according to a May 4 announcement from the British royal family.

Markle, now retired as an actress, appeared on numerous television programs produced in the United States, including the game show Deal or No Deal, and was a member of the cast of the USA Network legal drama Suits for several years.

Additional information about the stamps and related stamp products will be posted on the Royal Mail website.