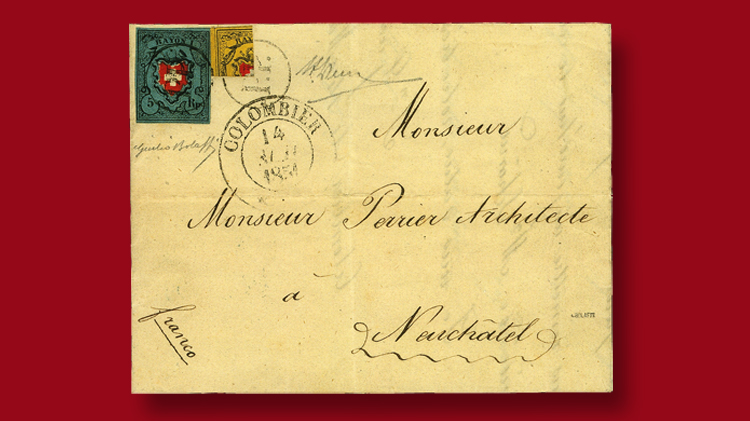 An 1851 cover from Switzerland franked with the 1850 5-rappen dark blue Rayon I Swiss stamp and the upper left quarter of a yellow 10r stamp, paying the 7½r postage rate. The cover will be offered during the May 28-June 2 Corinphila auction. 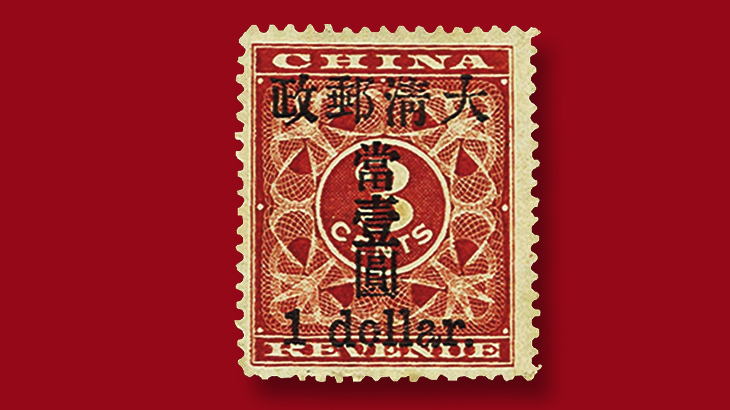 China’s unused 1897 “Small Dollar,” a $1-on-3¢ red revenue surcharged stamp. An example of this classic rarity will be offered by Corinphila in Zurich during its May 28-June 2 auction series. 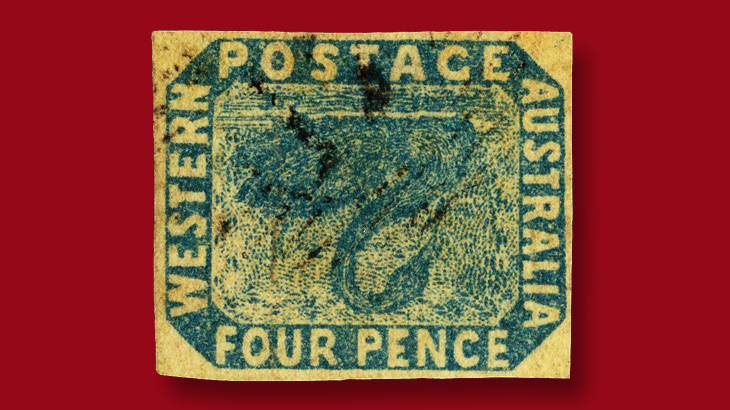 Known as the Inverted Swan (though it is actually the frame that is inverted), this famous 1854 Western Australia 4-penny error stamp will be auctioned by Corinphila during its auction of Australian states and commonwealth.
Previous
Next

The Swiss auction firm Corinphila has scheduled a series of five public auctions in Zurich from May 28 to June 2. Classic stamp rarities from China and Western Australia are among the many top items that will be offered.

A substantial worldwide auction with more than 2,660 lots is just the first of the five sales to be presented.

The worldwide auction will take place over the course of multiple sessions and offers stamps, postal history and more, including large lots and collections.

There are two major varieties of the $1 surcharge on this issue. The characters printed vertically over the “3 cents” denomination in the center of the stamp are small on this world rarity, which is the first of the two $1 surcharges printed. Soon after the stamp was issued, a decision was reached to enlarge the overprint, resulting in the second variety with wider figures (Scott 84).

Only 32 of the unused Small Dollar red revenue stamps are known, and Corinphila notes that while many of those have faults and staining, the example in this auction “is in wondrously fresh condition.”

The stamp’s provenance includes the collection of Arthur J. Hind in the 1930s, and that of Josiah K. Lilly in the 1960s.

The value of the Small Dollar red revenue is $900,000 in the 2018 Scott Classic Specialized Catalogue of Stamps and Covers 1840-1940. That catalog value is printed in italics, representing an item that can be difficult to value accurately.

Corinphila has listed a start price of 300,000 Swiss francs. The Swiss franc and the U.S. dollar are nearly equivalent but fluctuating, so the start price (as of early May) is just under $300,000.

Some three dozen lots in this auction offer zeppelin postal history, including covers carried aboard the Graf Zeppelin and the Hindenburg. One of these is a German postcard addressed for delivery on the planned 1937 Hindenburg return flight from Lakehurst, N.J., to Friedrichshafen, Germany, and franked with one of Germany’s 1933 or 1934 60-pfennig claret and black President von Hindenburg stamps.

The postcard was salvaged along with others from the tragic May 6, 1937, crash, fire and destruction of the Hindenburg and is scorched with its lower right corner burned away. A May 10 New York paquebot marking was applied prior to its eventual delivery.

Corinphila lists a start price for the postcard of 1,000fr.

A significant selection of Brazil’s well-known 1843 Bull’s-Eye issue, the first stamps of that South American nation, includes a single 60-reis stamp (Scott 2) described by Corinphila as the sole recorded example of a Bull’s-Eye first-day usage on piece. It is cleanly struck by a rimless Correio Geral da Corte datestamp of “1-8-1843” (Aug. 1, 1843).

Corinphila lists this item with a start price of 15,000fr.

The Australia auction is scheduled for May 31 and presents another iconic rarity, the Inverted Swan of Western Australia (Scott 3a).

The rare 1854 4-penny blue lithographed stamp is actually an error of an inverted frame that was mistakenly transferred upside down by the lithographer. The error was soon corrected, but either 14 or 15 examples are known to exist, with seven ensconced in institutional collections, including one in the Royal Philatelic collection of Queen Elizabeth II.

The example in this auction, Corinphila notes, is by far the most attractive of the Inverted Swans available to collectors. All of the known stamps are used.

The dedicated Switzerland and Liechtenstein auction features a unique franking of the 1850 5-rappen dark blue Rayon I Swiss stamp with the upper left quarter of a yellow 10r stamp, combining to pay a 7½r postage rate on a folded letter to Neuchatel. The cover shows a double-ring Colombier postmark dated May 14, 1851, and each stamp is struck with the “P.P.” in circle postal marking.

Corinphila lists this cover with a 125,000fr start price.

While the Corinphila auction series offers a number of scarce and rare items, it also includes stamps, covers and even larger lots with starting prices of 100fr. In the firm’s announcement of the upcoming sale, managing director Karl Louis describes the auction as the biggest that Corinphila has presented in many years.

The various sales within this series can all be viewed with online bidding options, and also as PDF catalogs.