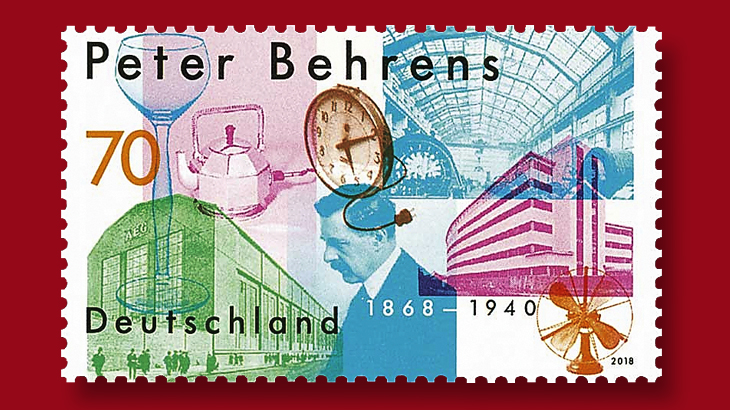 Examples of buildings and products designed by Peter Behrens are pictured on Germany’s new stamp marking his 150th birth anniversary.

A new German commemorative has several images packed into its design.

A photographic portrait of Behrens is shown in blue on the stamp (bottom center). Pictured on the left in green is the AEG turbine factory in Berlin, designed by Behrens and built in 1908-09, with an interior view of the factory in blue in the upper right.

The other building on the stamp, shown in pink on the right side of the design, is the Linz Tobacco Factory. Built between 1929-35, it was designed by Behrens and Austrian architect Alexander Popp.

Although they are not pictured on the stamp, Behrens also designed poster stamps (cinderellas) for AEG.

Daniela Haufe and Detlef Fiedler designed the new commemorative. Bundesdruckerei printed it by offset in sheets of 10.