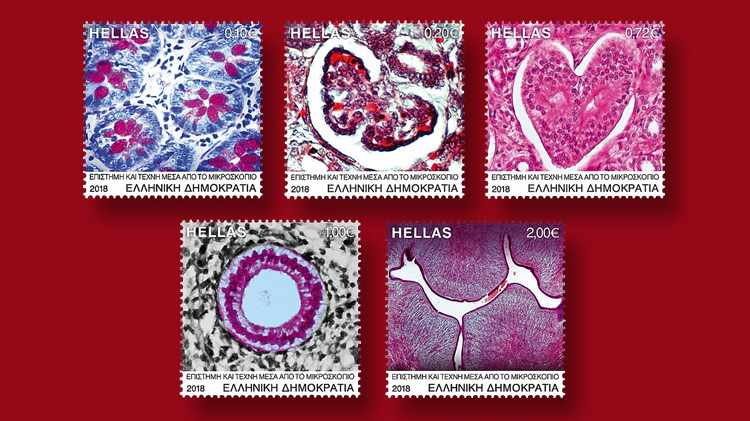 The five stamps in Greece’s Science and Art Through the Microscope set illustrate how a pathologist discovered shapes and patterns while working with a microscope.

Greece’s Science and Art Through the Microscope — a five-stamp set released March 16 — depicts shapes that have been revealed while studying human cells.

These images were captured by Dr. Maria Lambropoulou, a pathologist and associate professor of histology-embryology at the Democritus University of Thrace Medical School.

“Pathologists have a very important job to do, as they help diagnose and treat diseases and spend endless hours studying human tissue. Oftentimes, though their labours may seem solitary and unexciting, the images that appear before their eyes are simply amazing, particularly when the cells unintentionally form images and scenes that are as beautiful as any painting hanging in a gallery.”

According to the new-issue announcement, the microscopic art shown on the stamps resemble flowers, 10¢; a butterfly, 20¢; a heart, 72¢; a wreath, 1; and a deer, 2. However, what is being examined under the microscope is not explained.

Marina Lasithiotaki designed the stamps. Veridos Matsoukis SA printed them by offset in sheets of 20.