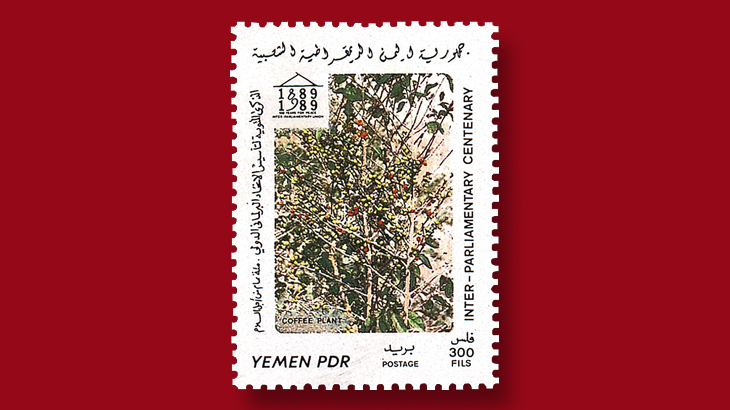 The People’s Democratic Republic of Yemen 300-fils Coffee Plant stamp (Scott 439), issued in 1989 to commemorate the 100th anniversary of the founding of the Inter-Parliamentary Union, is selling for more than 2018 Scott Standard Postage Stamp Catalogue v

Yemen lies on the southwestern part of the Arabian Peninsula, strategically located on the Arabian Sea, the Gulf of Aden, and at the chokepoint for entrance into the Red Sea.

In 1990, the two countries merged, and the People’s Democratic Republic of Yemen became a dead country for stamp collectors. The union was unhappy and did not last long with fighting breaking out again in 1994. It continues to this day, with Saudi Arabia backing the Sunni Yemenis and Iran backing the Shiites.

The People’s Democratic Republic of Yemen issued its last stamps in April 1990.

On Dec. 20, 1989, the country issued a 300-fils Coffee Plant stamp (Scott 439). The stamp commemorates the centenary of the founding of the Inter-Parliamentary Union. The union, which still exists today, was the first permanent forum for international political multilateral negotiations.

The stamp is of interest to United Nations collectors and coffee topical collectors, in addition to collectors of Yemen.

The 2018 Scott Standard Postage Stamp Catalogue values the stamp at $5 in mint never-hinged condition. The stamp is currently selling for up to twice as much as its Scott catalog value. If you find it offered at or near the Scott catalog value, it is a good buy.