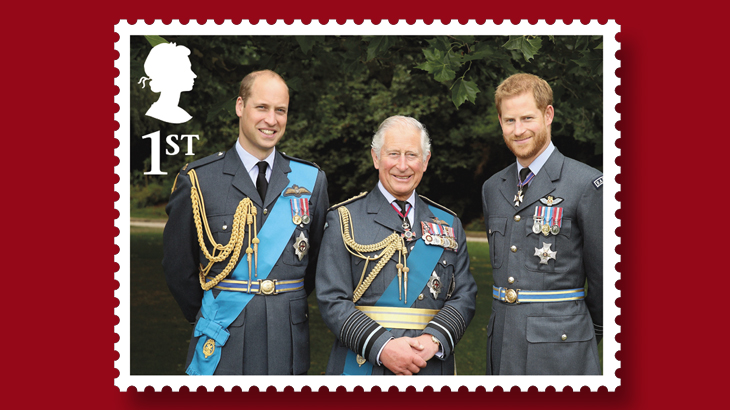 Great Britain’s Royal Mail is issuing a souvenir sheet of six stamps Nov. 14 for the 70th birthday of Prince Charles. One stamp in the sheet features a new portrait of the Prince of Wales with his sons Prince William and Prince Harry. 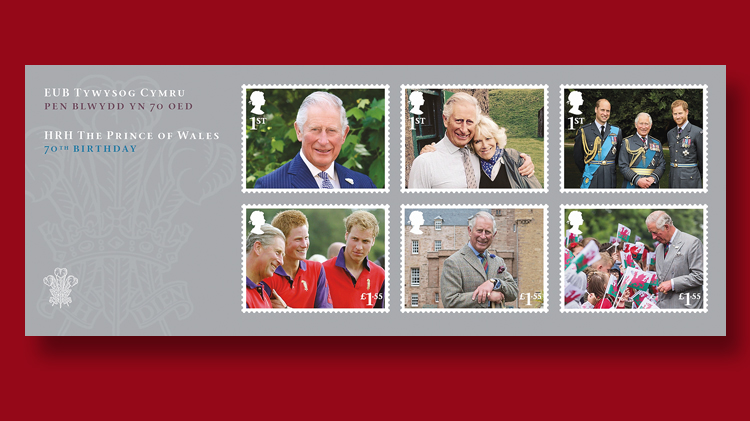 In addition to photographs of Prince Charles and his sons, Royal Mail’s souvenir sheet for his 70th birthday shows him with his wife and undertaking official duties.
Previous
Next

Great Britain’s Royal Mail unveiled the design Nov. 10 for its souvenir sheet celebrating the 70th birthday of the Prince of Wales. The sheet is being issued Nov. 14, the prince’s birthday.

At the age of 3, he became heir apparent and Duke of Cornwall following his mother’s accession to the throne. On July 1, 1969, he was invested as Prince of Wales by the queen. Great Britain issued a set of five stamps for the occasion (Scott 595-599).

The new souvenir sheet for his birthday includes stamps picturing the prince with his family and undertaking official duties.

One stamp on the sheet (upper right) shows a new portrait of Prince Charles with his two sons: the Duke of Cambridge (Prince William) and the Duke of Sussex (Prince Harry).

According to Royal Mail, this photograph was taken at the recent Royal Air Force centenary commemorations at Buckingham Palace. Royal Mail added that Princes Charles is marshal of the RAF.

Father and sons also are pictured on another stamp in the sheet (lower left) showing a photograph taken at the Cirercester Park Polo Club.

Prince Charles is pictured with his wife, the Duchess of Cornwall, on the center stamp in the top row.

The other three stamps show a photographic portrait (upper left), Prince Charles at the Castle of Mey (bottom row center) and greeting schoolchildren during a visit to Llancaiach Fawr Manor in Wales (lower right).

The souvenir sheet and related products are available online.