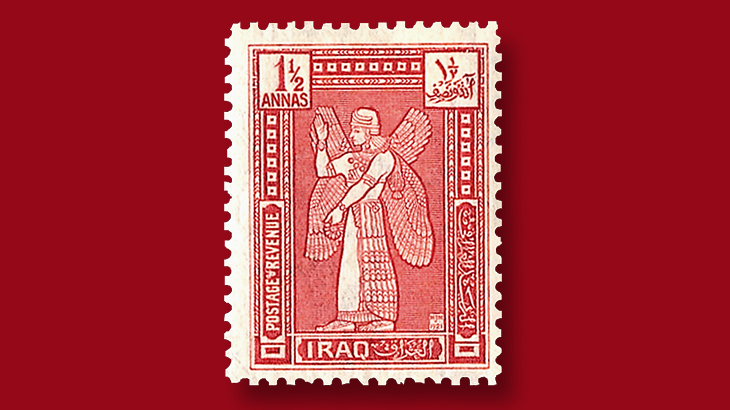 Demand is strong for stamp issues of the Kingdom of Iraq (1923-58). Like many sets of the kingdom, the first issue of 1923-25 is selling at or near the 2019 Scott Standard Postage Stamp Catalogue value in fine-very fine grade and unused hinged condition.

Known as Mesopotamia (the land between the rivers), Iraq was home to the ancient civilizations of Sumer and Akkad before being conquered and absorbed by the Assyrians, Babylonians and Persians.

It was conquered by the Arabs in the seventh century, overrun by the Mongols in the 14th century and by Tamerlane in the 15th century.

In the 17th century, it was conquered by and became a province of the Ottoman Empire.

The British created the State of Iraq as a League of Nations mandate under King Faisal I after World War I. It became the independent Kingdom of Iraq in 1932. In 1958, the Ba’athists, an Arab nationalist and socialist party, overthrew and murdered King Faisal II and established the Republic of Iraq.

The set is a good buy in F-VF grade and unused hinged condition at or near the Scott catalog value of $229.50.