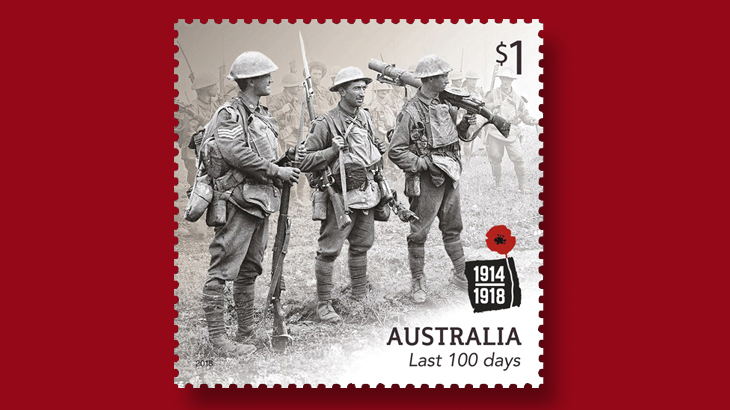 Australia’s five-stamp set marking the 100th anniversary of the end of World War I includes this stamp representing hostilities on the Western Front in the last 100 days of the war.

Australia's postal administration is concluding its five-year series that portrays different aspects of World War I from its beginning on July 28, 1914, to the armistice signed 100 years ago on Nov. 11, 1918.

The final set in the series was issued Oct. 2. Australia Post’s announcement of this set included the following quote from Aaron Pegram, the Australian War Memorial senior historian who worked with the post office on the stamp series:

“We tried to tell the story of Australia during the First World War and the impact it had on Australian society. Australia Post’s five-year commemorative stamp program has been comprehensive. It has covered all theatres of fighting, the major campaigns fought by the Australian Imperial Force, and both the victories and losses during the war. This final issue looks at the momentous events of 1918, the Armistice signed on 11 November, and loss of over 60,000 Australian war dead in over four years of fighting.”

All five face-different stamps in the last set are denominated $1 to pay the domestic rate.

The other three stamps show celebrations when the armistice was declared and flags of the countries signing the armistice, families waiting for the troops to return home, and French children at Adelaide Cemetery at Villers-Bretonneux tending the graves of Australian soldiers.

A souvenir sheet includes all five stamps and a quote from Australian WWI correspondent C.E.W. Bean, “And so it is peace.”