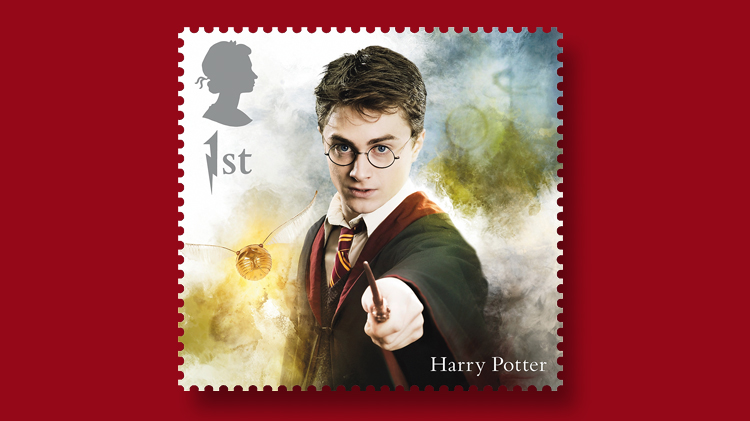 Harry Potter and his friends will appear on a new Royal Mail stamp set coming out Oct. 16. 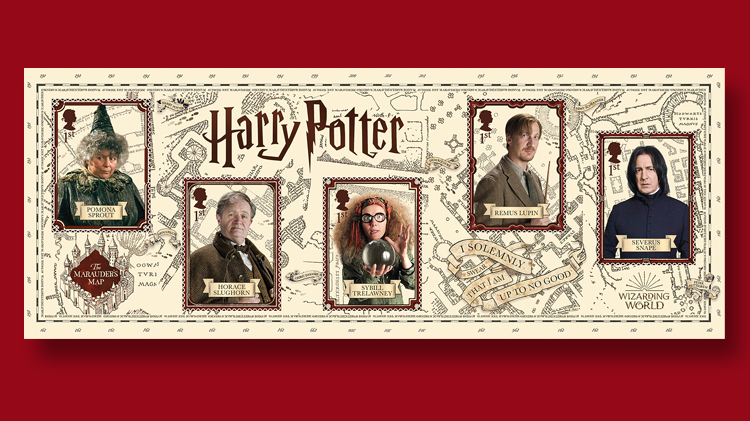 Great Britain’s souvenir sheet for its new Harry Potter stamps shows five professors of Hogwarts School of Witchcraft and Wizardry against a background of the Marauder’s Map. 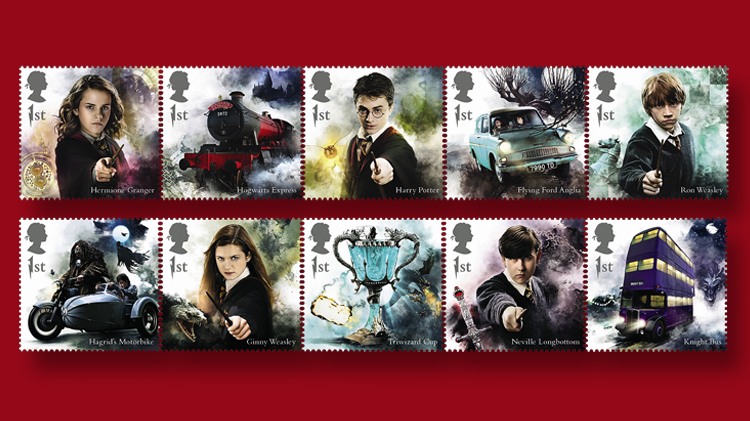 Ten of Great Britain’s new Harry Potter stamps to be issued Oct. 16 show characters from the films, as well as vehicles and the Triwizard Cup.
Previous
Next

The "more" includes hidden designs. Royal Mail said, "To provide a little extra magic and intrigue to all 15 stamps, there are secret details that can only be revealed under ultraviolet light."

Royal Mail partnered with Warner Bros. Consumer Products to produce these nondenominated first-class Harry Potter stamps. Ten of the stamps are in two se-tenant (side-by-side) strips of five, and five are in a souvenir sheet.

The beloved film series consists of eight movies based on the novels by British author J. K. Rowling. They tell the story of a young wizard, Harry Potter, and his friends Hermione Granger and Ron Weasley — students at Hogwarts School of Witchcraft and Wizardry.

Five stamps display iconic characters from the films including Harry, Hermione, Ron, Ginny Weasley and Neville Longbottom. Also appearing in the set are the Triwizard Cup and modes of transportation used in the films: Hogwarts Express train, the enchanted motorbike, the flying Ford Anglia and the Knight Bus.

The "1st" designation on these stamps also pays tribute to the movies. Royal Mail said, "The style of the ‘1’ depicting the value on each of the stamps will mirror the iconic font used for the films."

This is not the first time that Royal Mail has featured Harry Potter themes on its stamps. The novels and coats of arms from them are pictured on a set of stamps issued in 2007 (Scott 2479-2491), and Dumbledore and Voldemort are depicted on stamps in the 2011 Magical Realms issue showing fictional wizards and magicians (2877-2878).

Other countries also have issued Harry Potter stamps, including the United States in 2013 (Scott 4825-4844).

True North designed Great Britain's new Harry Potter stamps, with digital image enhancements by Smoke & Mirrors London. International Security Printers printed them by lithography in sheets of 50 (sold in panes of 25 at most postal outlets). The stamps are 37 millimeters by 35mm each, perforated gauge 14 by 14.5.

The souvenir sheet includes five nondenominated first-class stamps. The sheet measures 192mm by 74mm, and its self-adhesive stamps are 27mm by 37mm and perforated gauge 14 by 14. The Chase designed the sheet, and International Security Printers printed it.

Additional products for the set include a booklet with the Harry Potter and Hermione stamps blue Queen Elizabeth II Machin definitives; first-day covers with an information card featuring stills from a selection of Harry Potter films; a presentation pack with all 10 stamps and imagery of Harry, Hermione, Ron, Hagrid, Ginny and Neville; a press sheet containing 12 souvenir sheets; 16 postcard reproductions of the 15 stamp designs plus the souvenir sheet; and more.

A prestige booklet including stamps, pictures and text is scheduled to be issued Dec. 4.