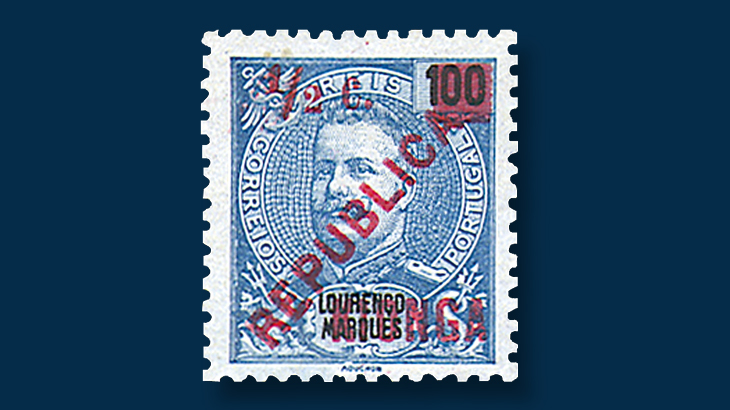 The country of Kionga can be completed with one set of four overprinted and surcharged stamps (Kionga Scott 1-4) issued May 29, 1916.

Prior to World War I, the Kionga Triangle, located on the east coast of Africa on the Indian Ocean north of Mozambique, was part of German East Africa. Portugal joined the Allies and occupied the roughly 1,000-square-mile territory in April 1916. After World War I, Kionga was formally awarded to Portugal and was incorporated into the Portuguese colony of Mozambique.

The Portuguese issued four stamps for Kionga (Scott 1-4) on May 29, 1916, by surcharging and overprinting “Kionga” on 100-reis “Republica” overprinted King Carlos stamps of Lourenco Marques (Scott 149). They were the only stamps ever issued for Kionga as they were superseded by stamps of Mozambique after the war.

As collectors, we find the idea of completing a country with one set appealing. This was one of the first sets we tipped as it appeared in the Stamp Market Tips column in the June 5, 2006, issue of Linn’s. It is time to tip it again.

Most of the Lourenco Marques stamps used for overprinting were without gum. The 2019 Scott Standard Postage Stamp Catalogue values the Kionga set of four unused without gum at $105 and in used condition at $71. There is more demand for unused without gum than for used examples. Not many exist in truly very fine grade, so look for examples with the design clear of the perforations with all of the perforation teeth intact.