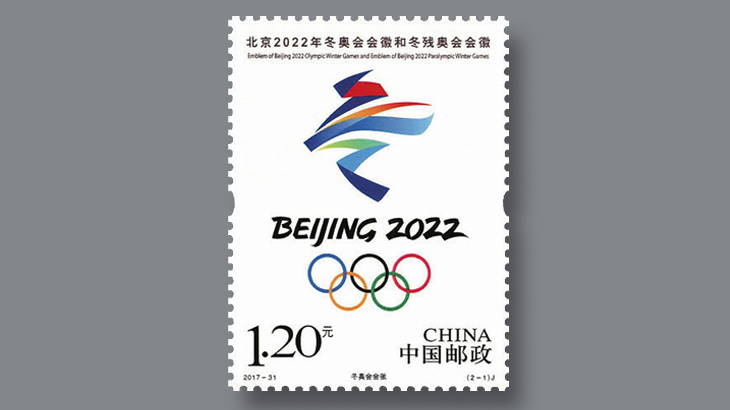 China recently unveiled the emblem for the 2022 Beijing Winter Olympics and issued a stamp displaying it. A similar $1.20 stamp depicts the Paralympics emblem for 2022.

China Post already is gearing up for the next Winter Games, the 2022 Beijing Olympics and Paralympics, issuing two stamps showing the emblems just two weeks after they were revealed.

The emblem for the 2022 Winter Olympics is called “winter dream.” The design is based on Chinese calligraphy for the word “winter” and also shows a symbolic skater at the top and skier at the bottom.

The Paralympics emblem is based on the Chinese character for “flying” and “evokes the image of an athlete in a wheelchair rushing towards the finish line and victory,” according to the website of the Beijing Organizing Committee for the 2022 Olympic and Paralympic Winter Games.

The stamp designs include more than just the emblems, however; “BEIJING2022” is repeated in the background in type that China Post describes as “faintly visible,” and a QR code links to an online video about the Beijing Winter Olympics and Paralympics.

The stamps were printed in separate sheets of 12.