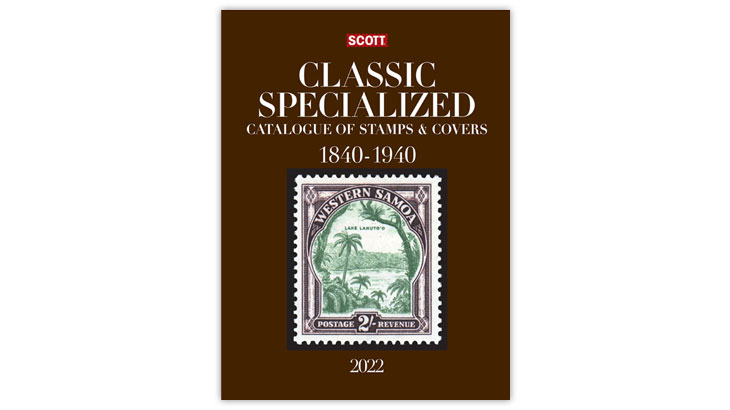 The 2022 Scott Classic Specialized Catalogue of Stamps and Covers 1840-1940 includes many editorial enhancements and value changes.

The 2022 Scott Classic Specialized Catalogue of Stamps and Covers 1840-1940, widely recognized as the best single-volume catalog for classic-era stamps of the world, celebrates its 28th edition this year.

While the catalog typically is published in November, it will now be released Dec. 1 because of a supply-chain issue related to the hardcover material.

We recognize the tireless efforts of Scott editor-at-large Donna Houseman, who serves as the lead editor of the Scott Classic Specialized catalog. Houseman was assisted by Bill Jones, a former Scott associate editor. Together, they provided numerous updated values and significant editorial enhancements throughout the 2022 Scott Classic Specialized catalog.

What sets the Scott Classic Specialized catalog apart from the six volumes of the Scott Standard Postage Stamp Catalogue are the thousands of never-hinged listings, on-cover listings, varieties, pre-stamp postal markings and forerunner listings, local stamps and other important features.

Parcel post stamps for Algeria were added for the first time.

Editorial notes were added in Andorra for stamps that were authorized but not issued. Look for these notes after Scott 12 and C1.

Australian States were closely reviewed with thousands of value changes made, including a mix of increases and decreases across all issues. For New South Wales, there were approximately 1,100 changes, and Queensland had just shy of 600 changes.

South Australia saw about 575 changes, and Tasmania had approximately 250.

Stamps of Victoria showed strength, and many values increased among the approximately 650 changes made.

The stamps of Cameroun were reviewed carefully, and approximately 20 value changes were made.

Values for Caroline Islands stamps were examined, and value changes were made to almost every major listed stamp for this country in the Scott Classic Specialized catalog. A majority of the changes made reflected slight decreases.

Approximately 50 value changes were made for the stamps of China. Among the mix of increases and decreases was a slight increase for the 1912 President Yuan Shih-kah set of 12 stamps (Scott 190-201), which moved from $1,183 in unused condition to $1,279.

A handful of changes were made to both Costa Rica and Ecuador, and Uruguay saw close to 400 changes. For Uruguay there were more decreases than increases. In general, Latin America continues to be popular with collectors, and the lack of value changes for other countries in this area reflects that.

For France a significant editorial addition for this year was the addition of two local stamps as Scott L1 and L2. Both were issued by the Chamber of Commerce. The first was issued during a postal employee strike and the second during the German occupation.

British offices abroad were reviewed thoroughly, and almost 900 value changes were made. Among the increases was the set of nine 1943 East African Forces stamps (Scott 1-9) that went from $27.80 in unused condition to $51.90.

The stamps of Saudi Arabia saw some significant increases and new minor listings added. Approximately 100 value changes were made.

Copies of the 2022 Scott Catalogue Classic Specialized are available on AmosAdvantage.com in both print and digital formats.