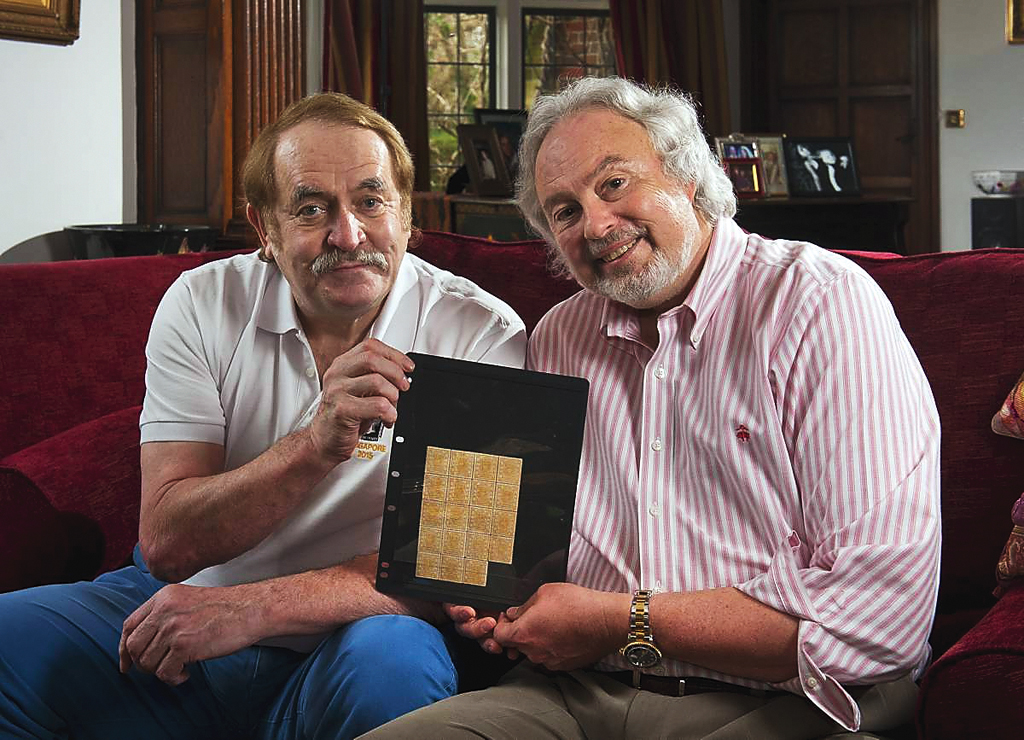 An extraordinary find of 35 China 1882 5-candarin orange yellow Imperial Dragon stamps in the United Kingdom is set to electrify the world of China philately.

The stamps, which had lain undisturbed for approximately 125 years, were discovered in the attic of a house in the Cotswolds.

Specifically, the stamps were found in an ornate wood cigar box as three unused multiples of China Scott 6: a block of 19, a block of 10 and a block of six.

According to a Feb. 9 report on the Daily Mail website, the stamps “were sent to an auction in Winchcombe, in Gloucestershire, where they were given an estimated value of between £800 and £1,000.”

“However, they were snapped up for an astonishing £79,000 by international stamp dealer Allan Grant, who received a tip-off that the stamps could be worth a fortune.”

Grant, who owns Rushstamps in Lyndhurst, contacted Laurence Gibson of Kelleher Auctions in Danbury, Conn., to tell him of the find.

Grant and Gibson then decided to work together to buy the stamps, which non-philatelic auction house British Bespoke Auctions had as lot No. 94 — described as “A Cigar Box of Early Chinese Stamps” — in its Jan. 31 auction.

Following the conclusion of the sale, Gibson, a well-known expert on the stamps of early China, immediately flew to visit Grant and inspect the stamps personally.

Gibson told Linn’s that all 35 stamps are in the correct shade “and have been plated with all cliches authenticated by me.”

A cliche is the individual unit consisting of the design of a single stamp, combined with others to make up the complete printing plate.

Additional details concerning the discovery were provided to Linn’s by Randy Neil of Neil Creative Media in Overland Park, Kans., who is the public relations representative for the Kelleher firm.

“Larry Gibson is a world-ranking expert on China philately,” Neil said. “He expertized each stamp in the three blocks.

“Each stamp is slightly different from one another, so it is possible to plate their positions in the original sheet.”

Neil told Linn’s that Kelleher plans to auction the stamps at one of its sales in Hong Kong in April.

Gibson provided background on the other known multiples of Scott 6.

“What is important to note is that since 1882, only three recognized mint multiples of this stamp existed up until now,” Gibson said.

“They are the unique sheet of 25 originally offered in the 1991 Starr sale conducted by Sotheby’s, which fetched £374,000 and which was referred to as the most important item in Chinese philately. It was purchased by Lam Man Yin of Hong Kong who sold it privately to Mr. Ting in China for a rumored figure of around $1 million; a block of eight from the Beckeman collection; and a margin pair, which is without equal quality-wise.”

Neil told Linn’s that Kelleher plans to refer to the 35 newly found 5c Imperial Dragon stamps as “The Lady Cotswolds Missionary Find” in its publicity for the upcoming auction.

According to Gibson, the three blocks are to be offered intact.

"The blocks will be offered individually as three separate lots," he said. "Since they represent fully half of the known multiples, we believe it makes good sense to do so."

A relative of the owner of the Cotswolds house where the stamps were found was a missionary in China who used the 5c Imperial Dragon stamps, among others, for postage.

“The stamps remained in the family, safely tucked into little brown church donation envelopes since the late 1890s, when the missionary returned to the UK,” Gibson explained. “They were stored in the attic of their old family house and remained there for 125 years — amazing!

“This is, in fact, most likely the most outstanding find in the history of Chinese philately, and a once in a lifetime opportunity to unveil to the philatelic marketplace one of the greatest jewels of the China specialty.”