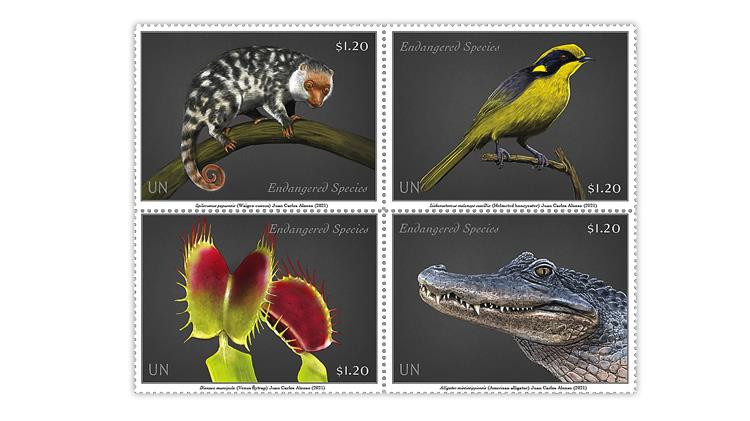 The United Nations Postal Administration will issue three panes of 16 Endangered Species stamps April 7, each with four different se-tenant (side-by-side) designs. The $1.20 stamps in the pane for use from the post office at U.N. headquarters in New York City feature a Waigeo cuscus, helmeted honeyeater, Venus flytrap and American alligator. 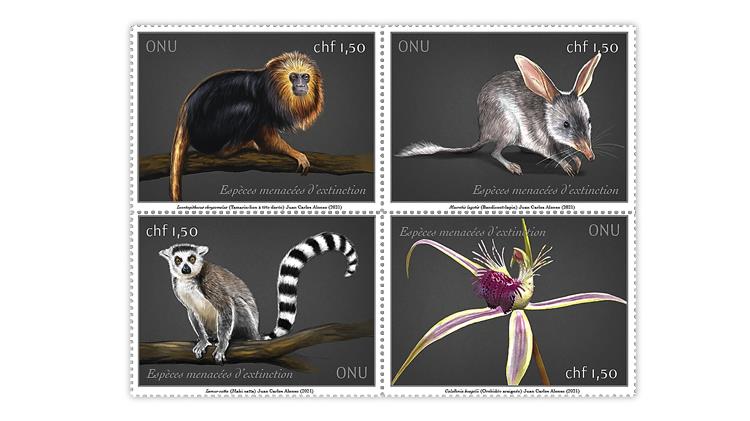 The new 1.50-franc stamps for use from the United Nations post office at the Palais des Nations in Geneva, Switzerland, illustrate a golden-headed lion tamarin, greater bilby, ring-tailed lemur and grand spider orchid. 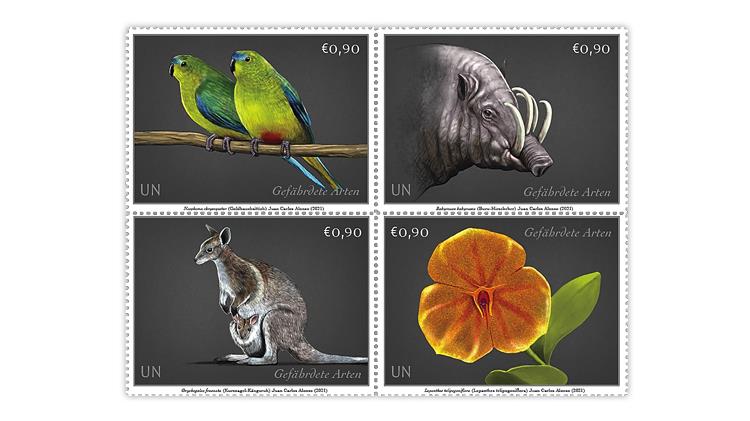 A pair of orange-bellied parrots, a babirusa, bridled nail-tailed wallaby and telipogon-like lepanthes are featured on the United Nations €0.90 Endangered Species stamps for use from the post office at the Vienna International Center in Vienna, Austria.
Previous
Next

The United Nations Postal Administration is issuing a new set of 12 Endangered Species stamps on April 7.

The new stamps illustrate “species of fauna and flora that are endemic or unique to a certain environment or region,” according to the UNPA’s Bulletin for collectors.

The stamps continue the UNPA’s Endangered Species series, which began in 1993. Like previous stamps in this series, the new stamps are issued in panes of 16, each with four se-tenant (side-by-side) designs. There is a separate pane for each U.N. post office.

The Waigeo cuscus, a type of marsupial, takes its name from the island of Waigeo in Indonesia, which is its only habitat. Both males and females exhibit a distinctive coat of black-and-white spots.

A critically endangered species, the helmeted honeyeater is found only in Australia. Just three small populations of the bird are known in a swamp forest to the east of Melbourne, according to Zoos Victoria.

Subtropical wetlands in North Carolina and South Carolina are home to the carnivorous Venus flytrap. According to the Botanical Society of America, “Like other plants, Venus’ Flytraps gather nutrients from gases in the air and nutrients in the soil. However, they live in poor soil and are healthier if they get nutrients from insects.”

Waterways in the United States from North Carolina to the Rio Grande in Texas are home to the American alligator. Males average about 11 feet in length, and females are about 8 feet long. Very large males approach 1,000 pounds.

Golden-headed lion tamarins live only in Brazil and are named for their distinctive golden manes.

These tree-dwelling primates subsist on a diet of fruit and small insects and vertebrates. Many of the seeds from the fruit they eat pass through their digestive system unharmed, which aids in seed dispersal that promotes growth of new plants.

Endemic to southwestern Madagascar, the ring-tailed lemur is named for the 13 black-and=white stripes that alternate along its tail.

The Smithsonian’s National Zoo and Conservation Biology Institute notes that ring-tailed lemurs “will gather in open areas of the forest to sunbathe. They sit in what some call a ‘yoga position’ with their bellies toward the sun and their arms and legs stretched out to the sides. This position maximizes the exposure of the less densely covered underside of the lemurs to the sun, warming them up before they forage.”

Ring-tailed lemurs are also known for their various vocal calls. Their territorial call can be heard more than a half mile away.

The eye-catching grand spider orchid is endemic to Western Australia. It features a large colorful central petal, or labellum, that functions to attract insects that pollinate the flower. The labellum, which is fringed on each side, serves as a stable platform upon which insects can land.

According to the eBird website, the orange-bellied parrot is a critically endangered bird found “breeding in tree hollows on button grass moors in southwest Tasmania in summer, and wintering on saltmarsh in coastal Victoria and South Australia.”

With fewer than 50 thought to exist in the wild today, the orange-bellied parrot is considered one of Australia’s most threatened species.

The San Diego Zoo Wildlife Alliance states: “The babirusa has been called ‘a wild pig with a dental problem.’ They have remarkable tusks or canine teeth that can grow right up through the skin in their snout and curve back toward their forehead. The word babirusa means ‘pig deer’ in the Malay language, as their wild-growing tusks are reminiscent of deer antlers.”

In captivity, the babirusa can live up to 24 years. Ten years is a normal life span in the wild.

The bridled nail-tailed wallaby is native to Australia and was believed to be extinct for most of the 20th century. However a small population was discovered in 1973. Since that time, the Australian Wildlife Conservancy has reintroduced populations in the Scotia Wildlife Sanctuary (2005) and in Pilliga, New South Wales (2019).

On the €0.90 stamp, a bridled nail-tailed wallaby joey (baby) is seen poking its head out of its mother’s pouch.

The telipogon-like lepanthes is a miniature orchid that is also an epiphyte, meaning that it grows on another plant without being parasitic. Native to Colombia, it is typically found at elevations of 400 meters to 700m, or approximately 1,300 feet to 2,300 feet.