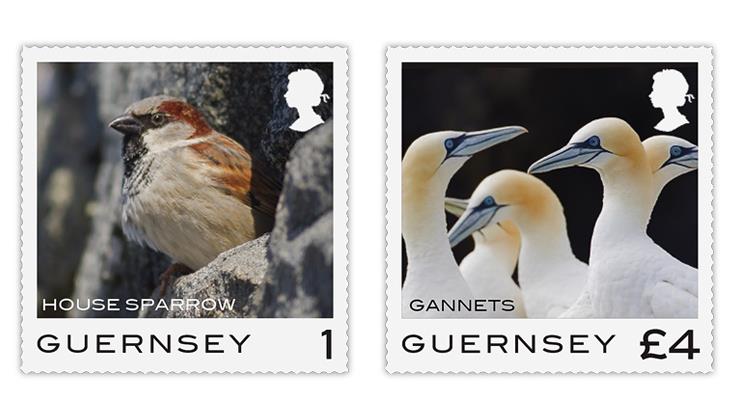 Guernsey Post will showcase local birds on a set of new definitive stamps to be issued Feb. 17. The 1-penny low denomination of this set of 17 shows a house sparrow, and the £4 high value depicts northern gannets. 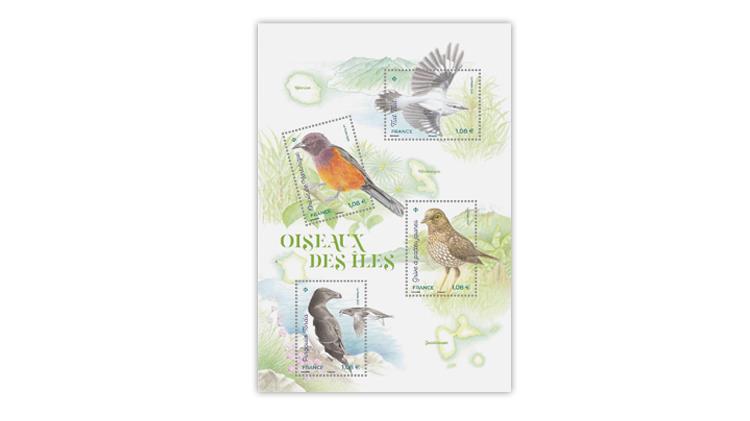 France highlights birds of three islands (Reunion, Guadalopue and Martinique) on this souvenir sheet issued Jan. 8 as part of a flora and fauna series. 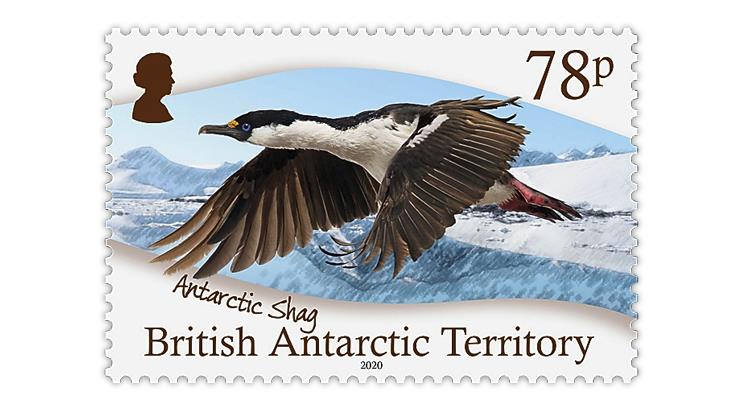 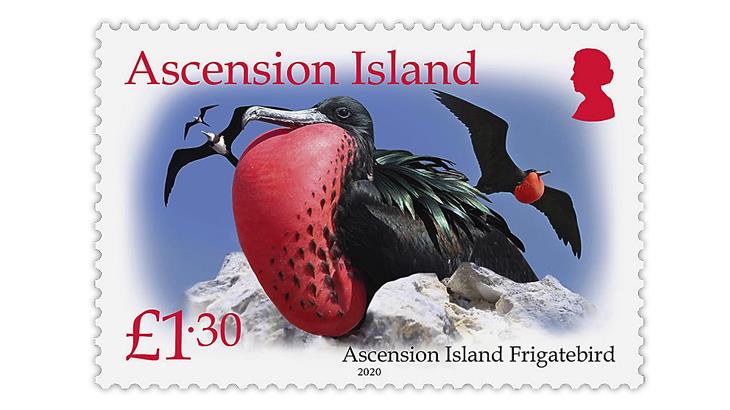 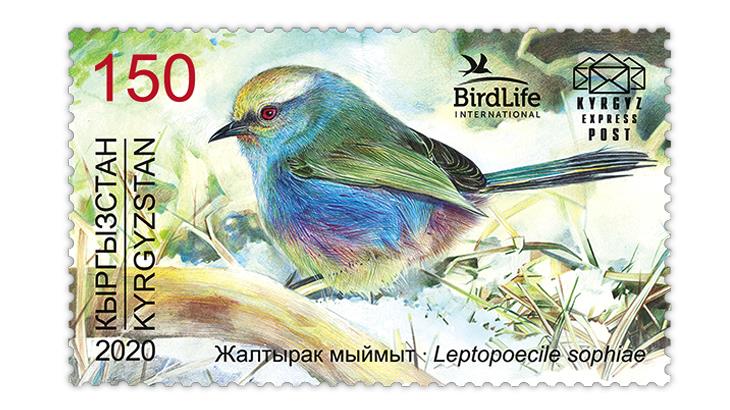 Kyrgyzstan’s bird of the year, the white-browed tit-warbler, is honored on this 150-som stamp issued Dec. 17, 2020, by Kyrgyz Express Post. 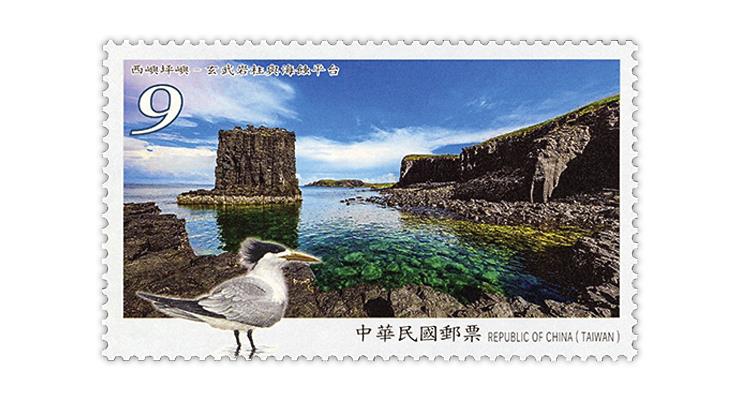 A stamp in Taiwan’s South Penghu Marine National Park set of four to be issued Jan. 20 depicts a greater crested tern and basalt columns off the island of Xiyupingyu. 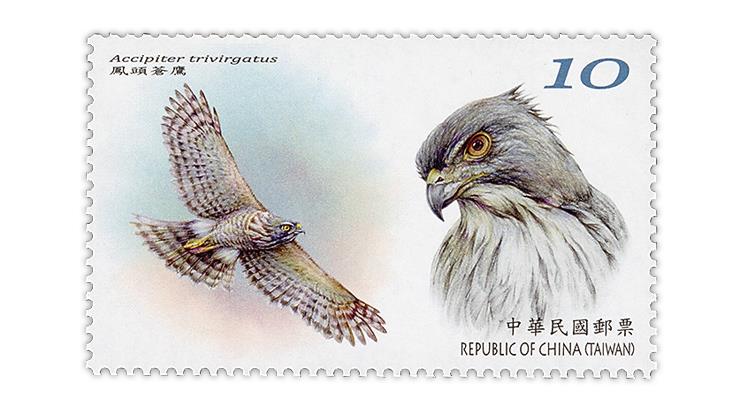 Taiwan promoted the conservation of four birds of prey, including the crested goshawk, on a set of four stamps issued Dec. 8, 2020.
Previous
Next

New definitive (regular-issue) stamps will depict some of the birds found regularly on the islands of the Bailiwick of Guernsey. Guernsey Post will issue these stamps Feb. 17.

The definitives range in denomination from 1 penny to £4. The former shows a house sparrow, and the latter pictures four northern gannets. According to Guernsey Post, these large seabirds “flock to Les Etacs and Ortac — rocks off the coastline of Alderney, which are home to a colony of nearly 6,000 pairs.”

Bridget Yabsley, head of philately at Guernsey Post, designed the stamps. She said, “We’re really excited to feature some of these colourful birds on our latest definitive stamps, from garden visitors and waders to birds of prey.”

The stamps were printed by Belgium’s Bpost printer by lithography in panes of 10.

A souvenir sheet in France’s Fauna and Flora series features birds of islands that are overseas departments and regions of France. La Poste issued this sheet Jan. 8.

The stamp in the upper right shows the Reunion cuckoo shrike (Lalage newton) in flight. This endangered bird is only found in two areas on the north part of Reunion, an island in the Indian Ocean.

Shown on the next stamp, located on the left side of the sheet, is a Martinique oriole (Icterus bonana).

A stamp on the right side of the sheet features the yellow-legged thrush (Turdus flavipes), a songbird found on about 30 islands in the West Indies, including Guadeloupe.

The final stamp, in the lower left, pictures the razorbill (Alca torda), a seabird found in northwestern France and other areas of the North Atlantic.

The border of the souvenir sheet shows drawings of the birds’ habitats and outline maps of France, Reunion, Martinique and Guadeloupe.

The issue also will include a pane of 15 of the Razorbill stamps.

Valerie Besser designed the stamps using illustrations by Isabelle Molinard. They were printed by Philaposte.

A new set of stamps from the British Antarctic Territory highlights birds of the Antarctic.

The announcement from Pobjoy Mint, its new-issue agent, said, “Adaptations of polar seabirds for survival in their extreme environment include dense plumage for insulation and a countercurrent heat exchange system to stop their feet [from] freezing. … It is one thing for a seabird to thrive in Antarctica in the austral summer when there is abundant food in coastal waters and 24-hour daylight, but quite another to tolerate the intense cold and darkness of the austral winter. However, only some spend their nonbreeding season in much warmer climes.”

The stamps are the high denominations of the Island Treasures set of 12 definitives designed by the firm Bee Design.

The £1.30 stamp shows the island’s only endemic bird species, the Ascension frigatebird.

The £2.50 stamp represents Boatswainbird Island, a bird sanctuary. The bird shown on this stamp is not identified, but it appears to be another Ascension frigatebird.

Pictured on the £5 stamp are several Wideawake terns in flight.

Cartor Security Printing printed these stamps from the British Antarctic Territory and Ascension Island. They are sold in panes of 10.

A stamp issued Dec. 17, 2020, by Kyrgyz Express Post honors the white-browed tit-warbler (Leptopoecile sophiae) as the bird of the year.

The Kyrgyz Wildlife Conservation Society selected this small colorful bird as the bird of the year for 2020.

The stamp is denominated 150 som, the rate for domestic letters weighing up to 50 grams.

Daria Maier’s design for the stamp is based on a photograph by Ivan Turkovskii. The design also includes the emblems of Birdlife International and Kyrgyz Express Post.

Nova Imprim in Moldova printed the stamp by offset-lithography in panes of five with a label.

This is the second stamp in the Bird of the Year series. The first, issued April 22, 2019, shows the little bustard (Tetrax tetrax).

Taiwan’s Chunghwa Post included a bird on one stamp in its South Penghu Marine National Park set of four to be issued Jan. 20, and it promoted bird conservation on four stamps issued Dec. 8, 2020.

Each stamp in the South Penghu Marine National Park issue includes a scene from one of the park’s four main islands and also shows a species found in the park.

For example, the NT$9 stamp depicts a greater crested tern in the foreground and basalt columns just off the coast of the island of Xiyupingyu in the background.

The other stamp designs depict a green sea turtle and the Blue Cave on Xijiyu (NT$6), a giant triton mollusk and a forest of sea lavender on Dongjiyu (NT$8), and the herb Glossogyne tenuifolia and terraced fields on Dongyupingyu (NT$15).

Yi-lang Jheng designed the stamps. Cartor Security Printing printed them by offset in sheets of 20.

The Bird Conservation stamps draw attention to four birds of prey found on Taiwan: the black-winged kite (Elanus caeruleus) and peregrine falcon (Falco peregrinus) on two NT$8 stamps, the crested goshawk (Accipiter trivirgatus) on the NT$10, and the osprey (Pandion haliaetus) on the N$28.

Chi-jen Lai designed the stamps in this set, and Taiwan's Central Engraving and Printing Plant printed them by offset in panes of 18. The border area at the top of each pane shows additional images of the featured bird.