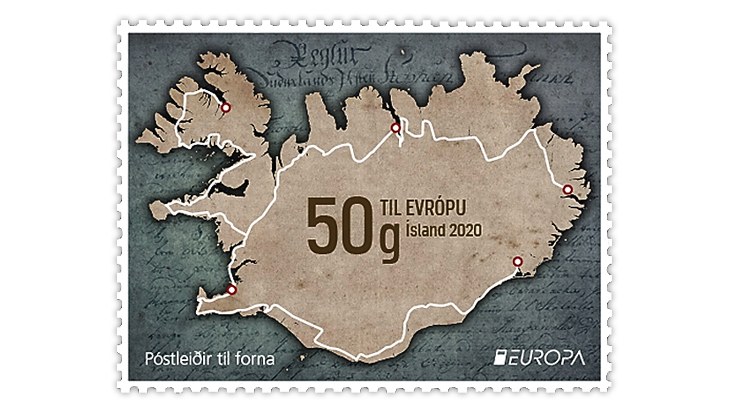 Iceland is calling it quits as a stamp-issuing nation. Iceland Post issued 11 stamps May 7, including this Europa stamp with the theme of ancient postal routes. The country’s last stamps are scheduled to be released Oct. 29.

Iceland Post has announced that it will stop issuing new postage stamps as of Oct. 29.

A May 7 post by on the Facebook page of Iceland Post’s philatelic division, Postphil, said stamps planned for release Oct. 29 “will be Iceland Post’s very last issues.”

In 2019, Iceland Post had reported that it planned to stop issuing stamps, but suggested that the last new issues would be in 2021.

But the end is coming sooner. Iceland Post’s customer experience manager Brynjar Smari Runarsson told Linn’s in an email, “Last year Posturinn [Iceland Post] announced that this would be the last year the company would release stamps for collectors. October will be the final release.”

Runarsson also said that new printings of already-issued stamps are possible in the future.

“We have plenty of stamps in stock for customers and will continue to use them,” Runarsson said. “If we foresee a shortage we will probably reprint older stamps in order to have sufficient stamps for senders.”

Iceland issued its first stamps in 1873 when it was part of the kingdom of Denmark. It became an independent republic June 17, 1944.

As of the end of 2019, Iceland had issued more than 1,500 stamps, according to the listings in the Scott Standard Postage Stamp Catalogue and in the Scott New Listings Update in the March 16 issue of Linn’s.

So far this year, Iceland Post has issued 11 stamps on May 7. These include single stamps for the centenaries of the Icelandic Met (meteorological) Office), the Supreme Court of Iceland and equal voting rights for all Icelandic citizens, and for the 50th anniversaries of the Reykjavik Arts Festival and Iceland’s membership in the European Free Trade Association. Two stamps each were issued in the following series: Domestic Animals, Tourism and Europa.

According to its 2020 stamp program, the Oct. 29 issues will include single stamps in the multination Norden (Nordic countries) and Sepac (small European postal Administrations) series, and single commemoratives for the 100th anniversary of the Order of the Falcon, the 250th anniversary of the Icelandic Land Commission, and the 800th anniversary of the beginning of the Age of the Sturlungs. Also scheduled to be issued Oct. 29 are two Christmas stamps and two stamps depicting garden vegetables.

For further details about the May 7 and Oct. 29 stamps, see the Philatelic Foreword column in the March 30 issue of Linn’s.

In the May 7 Facebook post, Postphil said, “As these will be Iceland Post’s very last issues, we hope you will appreciate the care and dedication put into their making and design.”