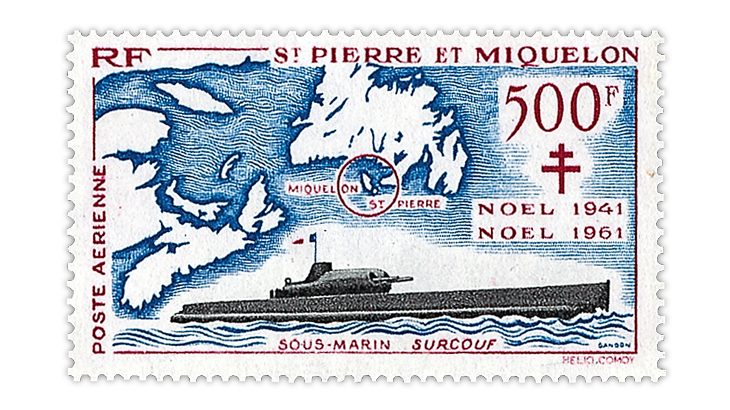 This 1962 airmail stamp shows the location of St. Pierre and Miquelon (within the red circle) off the southern coast of Newfoundland. The stamp commemorates the 20th anniversary of the liberation of the islands during World War II.

The April 15 monthly issue of Linn’s Stamp News just landed on the presses and goes in the mail to subscribers Monday, April 1. And if you subscribe to Linn’s digital edition, you’re at the head of the line with early access Saturday, March 30. Here are three stories you'll want to check out.

A small piece of France in North America

In the Philately of France column, Larry Rosenblum writes about the stamps of St. Pierre and Miquelon, the only area in continental North America currently controlled by France. This archipelago of small islands close to Canada has a volatile history that includes major roles during Prohibition and World War II.

Navassa, a small island located in the Caribbean Sea between Jamaica and Haiti, south of Cuba, contributed to the rise of the United States as a global power. In Spotlight on Philately, Ken Lawrence focuses on the history and elusive postal history of Navassa, as well as the United States’ and Haiti’s claims to it.

The Isle of Man celebrates its birds

The Stamp Excursions column visits the Isle of Man in the Irish Sea, focusing on four seabirds pictured on the stamps in a 1989 World Wildlife issue.

The Two-Penny Tyrian Plum: Inside Linn's

The innovation that changed U.S. stamps forever: Inside Linn’s