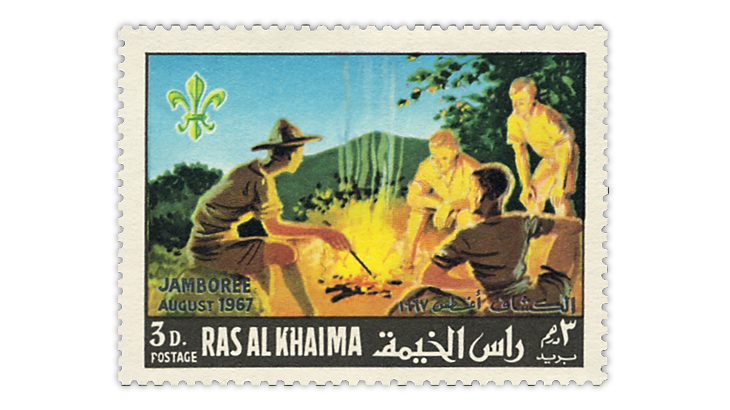 Many stamps of the Trucial State of Ras Al Khaima were added to the 2020 edition of Vol. 5B of the Scott Standard catalog. Pictured here is a single stamp from the 1967 set of stamps issued for the Boy Scouts Jamboree (Scott 168).

Collectors of the Trucial States will notice 461 new major listings for Ras Al Khaima added to the new 2020 Vol. 5B of the Scott Standard Postage Stamp Catalogue published Aug. 1.

These new listings bring Ras Al Khaima up to date from 1964 to 1970. Previously only eight stamps were listed.

The new listings also include hundreds of additional items (imperforate varieties, deluxe sheets) that are footnoted and valued.

Research by a number of specialist collectors and dealers on the stamps of the Trucial States provided the information the Scott catalog editors needed to list these stamps. The key piece of information was that these stamps were available for sale in Ras Al Khaima at face value. Also, although it was not a member of the Universal Postal Union, the sheikhdom had agreements with other UPU nations to carry its mail.

The Scott catalog editors reviewed press releases from Ras Al Khaima postal authorities, contemporary news reports, first-day covers, and commercial and philatelic covers. All of this effort helped provide the most accurate information for first-day-of-issue dates, and as such, the listings were built off of this new research.

Although Ras Al Khaima stamps continued to be issued through the end of 1972 and were valid for some time thereafter, the records (especially regarding issue dates) become very difficult for 1971-72.

The hope is to expand the listings in the Scott Standard catalog to 1972, but we are seeking additional information first. If you have first-day covers with dates that differ from the dates now shown in the catalog or for stamps issued in 1971-72, we would appreciate hearing from you.

Also, several of the images in the catalog are of canceled-to-order (CTO) stamps, and we would like to picture an unused stamp instead. If you have unused stamps for these issues, please contact us. We would like to scan the stamps.

You can contact me by mail at Jay Bigalke, Scott catalog editor-in-chief, Box 4129, Sidney, OH 45365; or by email at jbigalke@amosmedia.com.