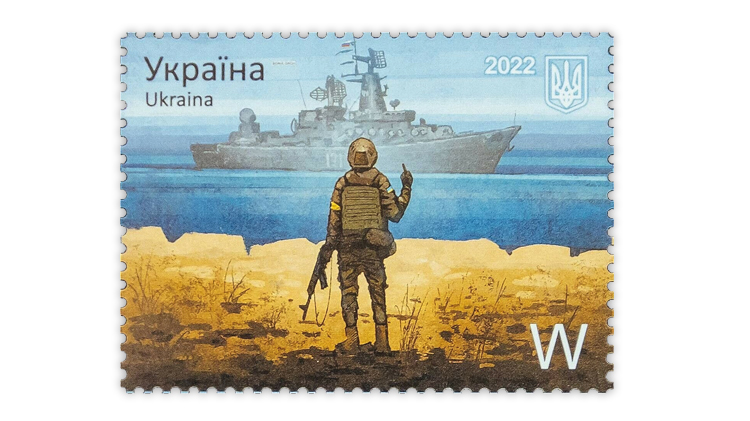 Ukraine issued two postage stamps April 12 illustrating the theme “Russian warship go f--- yourself.” The international-rate stamp is shown. The stamps quickly sold out at Ukraine’s post offices with a few still to be sold through its online postal store.

Ukrposhta, Ukraine’s post office, reported a near sellout of its two stamps with the theme “Russian warship go f--- yourself,” in a Facebook posting on April 20. The stamps were issued April 12.

They have attracted the attention of general news media around the world, which reported on both the new stamps and the long lines of people buying them at post offices in Ukraine.

Even the Late Night with Stephen Colbert television show featured the new issue in a short segment in which Colbert also took the time to explain what a postage stamp is for the benefit of younger viewers.

Demand for the stamps was so strong, Ukrposhta’s website for ordering stamps experienced long downtimes on April 12 and for several more days.

According to the April 20 Facebook posting, approximately 700,000 of the 1 million stamps had been sold and no more will be sold in person.

Ukrposhta said 100,000 stamps were to be allocated for sale online, but that limits were in place. Additionally, some stamps were set aside for philatelic subscriptions, political officials and postal employees.

The post office also emphasized that no more of these stamps would be printed, but it did indicate a possibility of using the design in a new series.

The difficulty for those outside of Ukraine to get the stamps has fueled a quick aftermarket for them, and Ukrposhta commented on that too on its Facebook page, condemning the speculation pricing of a first-day cover at $1,000 on eBay.

Ukrposhta stated in an April 18 posting that it had canceled all orders on its online store, including one for nearly 30,000 stamps.

Linn’s has noted single stamps selling for around $50 to $70 online, sheets at $200 to $300 and FDCs at around $600 to $1,000. FDCs autographed by Ukraine’s postmaster general and the soldier who uttered the now-famous reply to the Russian warship have sold for as much as $6,500.

The Scott catalog editors plan to list the new stamps with a dash for the value because of the current price speculation.