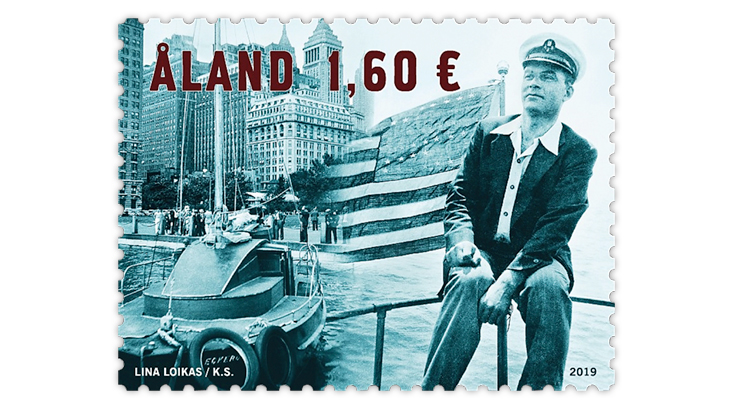 Aland will issue a stamp to honor Uno Ekblom’s 1939 crossing of the Atlantic Ocean from Aland to the United States in a small boat.

An upcoming stamp from Aland will commemorate the 80th anniversary of a man’s two-month journey across the Atlantic to New York City in a small wooden motorboat.

The 1.60 stamp, scheduled to be issued March 8, shows Uno Ekblom (1905-1955), his 30-foot boat Eckero, and the 48-star American flag. According to Aland Post, the design also depicts additional images from Ekblom’s photo album.

Aland Post said that the stamp “commemorates his implausible achievement as the first person to cross the Atlantic Ocean to the USA in a small rustic style boat.”

On May 3, 1939, Ekblom set out from Aland in Eckero with dreams of America and visiting the 1939 New York World’s Fair. A crew of two joined him in Sweden.

An article about the stamp in Aland Post Stamps, the new-issue bulletin of Aland Post, described Eckero as “equipped with a hot-bulb engine that barely reached 10 horsepower.”

As for the unnamed crew members, the bulletin said: “The two proved to be an encumbrance more than a help; one of them was continually seasick and the other was a heavy smoker, using up all of the matches meant to light the engine.”

Despite these odds, Ekblom reached his destination.

Lina Loikas designed the stamp. The security printer of Belgium’s postal administration, Bpost, printed it by offset in sheets of 24 (two panes of 12).

Newspaper headlines about Ekblom’s feat are pictured on perforated labels in between the two panes.

In addition to being commemorated on a stamp, Ek­blom’s adventure was highlighted in a 2018 film by director Per-Ove Hognos. Titled The Boy Who Crossed the Atlantic in English, the film is based on a 1940 book by Ekblom that was recently republished.