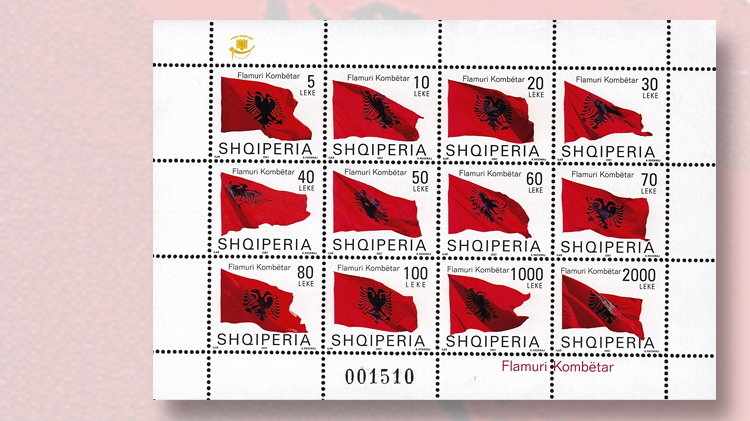 The last of the Ottoman Empire’s European possessions, Albania entered independence in 1912 poor, backward, tribal, and underdeveloped. After a brief period of progress under President Zogu (later King Zog), the Italians invaded in 1939 and things went downhill from there. After the Italian surrender in 1943, came the Nazis. And then the country was “liberated” by the Communists in 1944.

From 1944 to 1991 Albania suffered under one of the most repressive totalitarian police states in history. And during that period, it issued a lot of stamps that were canceled to order and sold in bulk to packet makers.

There aren’t a great many Albania collectors in the United States. However, since the fall of Communism in the early 1990s, Albania has issued some stamps with topical appeal in relatively low quantities. A good one to look for is the 2007 miniature sheet of 12 Albanian Flag stamps (Scott 2796). The study of flags is known as vexillology, and this sheet is popular and in demand with flag stamp topical collectors. The 2018 Scott Standard Postage Stamp Catalogue values the sheet in mint never-hinged condition and used condition at $100. That is a bit high, but if you find it offered in the $60-to-$80 price range, it is a good buy in mint never-hinged condition.