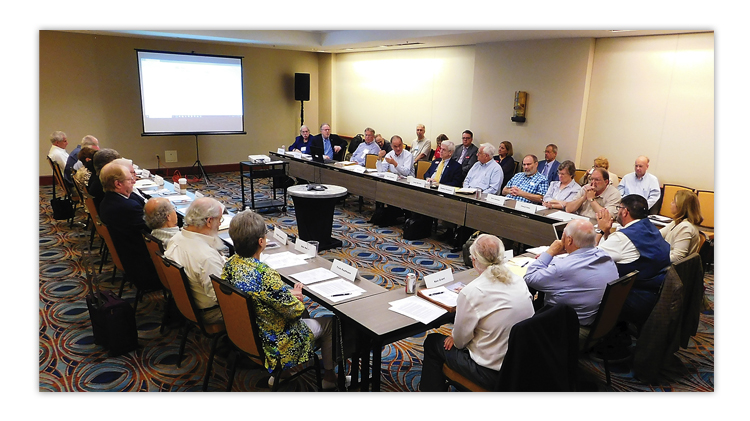 The leaders of the American Philatelic Society are pleased with the organization’s current financial stability, but they are also looking for ways to add to declining membership rolls of the largest stamp collecting organization in the world, and to expand outreach and educational efforts with the increased use of technology.

Efforts are underway on various projects, including paying down millions in bank loans.

The society’s debt is now under $3.7 million, he noted. Though it is a considerable sum, the cost of building the society’s headquarters in a former match factory in Bellefonte, Pa., a project that began 17 years ago, was more than $16 million. “We’re closing in on about 75 percent or 80 percent of that debt being retired,” Zeigler said.

Ken Nilsesteuen, treasurer of the American Philatelic Research Library, which operates in association with the APS, echoed Zeigler’s remarks but reminded the members in attendance that continuing efforts to retire that debt can be helped by their donations.

Zeigler also stressed the importance of recruiting and retaining new members. In particular, he would like to see more women added as APS members as a sign of the society’s inclusiveness.

APS executive director Scott English addressed membership concerns in his presentation before the July 31 joint meeting of the APS board and the APRL trustees.

“In June, we received 137 new applications for membership, which is 63 more than June 2018,” English added.

Ken Martin, the society’s chief membership officer, has been tracking APS membership trends and provided details for the boards.

One current focus is on retaining new members by using increased communication to make sure those individuals are familiar with the many benefits of APS membership.

Increased members-only content on the web and prospect mining (including contacting APS chapter members who are not themselves APS members) are additional areas being explored.

APS director of education Cathy Brachbill, APRL librarian and director of information services Scott Tiffney and chief content officer Tom Loebig all described value-added benefits for APS members that are in development or have been made available recently.

Loebig is also the new editor of the American Philatelist, the society’s monthly journal. He was among the five new APS staff members that English introduced to the boards.

Gary Loew is the new director of expertizing for the American Philatelic Expertizing Service. Susanna Mills is the digital media strategist, Diana Dombrowski is development assistant, and Sarah Berezenko works the library reference desk and manages work for the Society of Israel Philatelists.