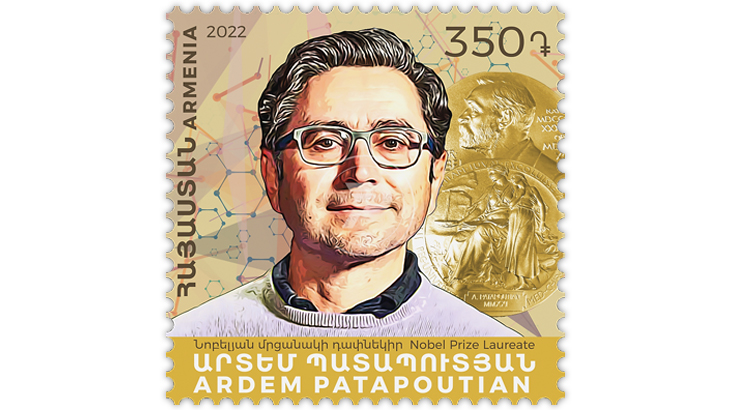 Ardem Patapoutian, the Armenian-American molecular biologist who shared the 2021 Nobel Prize in physiology or medicine, is honored on an Armenian stamp issued June 14. Patapoutian, who lives in California, is the first Armenian to win the Nobel Prize.

Patapoutian, who lives in California and is on the staff at Scripps Research near San Diego, is the first Armenian to win the Nobel Prize.

According to the official website of the Nobel Prize, Patapoutian worked with Julius to answer the question of how our nerve impulses are initiated so that temperature and pressure can be perceived.

The 350-dram stamp features an image of Patapoutian with the Nobel Prize pictured in the background on the right. Patapoutian’s name appears underneath his image.

In an email, Patapoutian told the San Diego Union-Tribune about his feelings surrounding the stamp issue.

“It is pretty surreal!” he said. “If anyone told 18-year-old me that my face would be on a stamp I would have felt mocked. This is very special to come from Armenia; as a kid I used to collect Armenian stamps!”

Patapoutian attended the June 14 ceremony for the stamp in Yerevan, Armenia’s capital. A number of government executives also attended, as did Hayk Karapetyan, the chief executive officer of HayPost, the national postal operator of Armenia.

This stamp closely follows another commemorative from Armenia featuring an American in the medical field. On Aug. 26, 2021, Armenia issued a stamp honoring Clara Barton (Scott 1278), founder of the American Red Cross.

David Dovlatyan designed the Ardem Patapoutian stamp, and the French security printer Cartor printed it in a quantity of 20,000. The stamp was issued in panes of eight; each stamp measures 40 millimeters by 40mm.

The stamp is available for sale through the website of HayPost.