Artwork by acclaimed designer on Jan. 5 issue from China Post 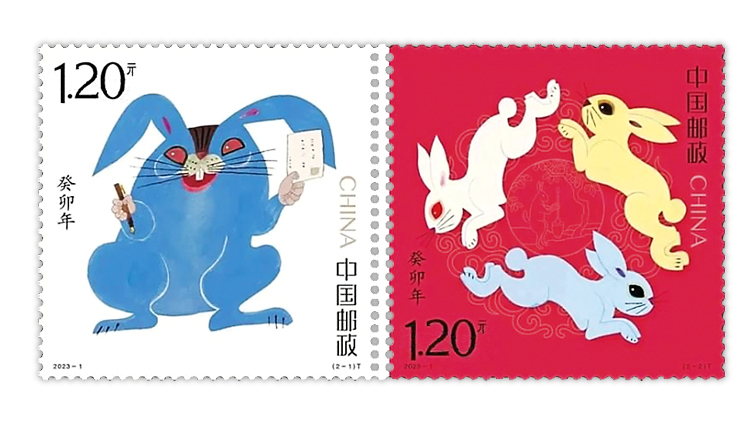 China Post, the postal agency of the People’s Republic of China, issued a set of two stamps Jan. 5 in celebration of the Year of the Rabbit for the Lunar New Year.

One stamp features a blue rabbit holding a pen and paper, and the other shows three rabbits running in a circle. Both are denominated 1.20 yuan.

Huang Yongyu, designer of the highly sought-after 1980 8-fen Year of the Monkey stamp (Scott 1586), provided the artwork for the new stamps.

While not especially rare, with 5 million copies issued, the 1980 Year of the Monkey stamp remains in high demand, with a mint, never-hinged example valued at $1,900 in the Scott Standard Postage Stamp Catalogue. The value is in italics to denote an item that is difficult to value accurately.

Huang celebrated his 98th birthday in 2022. International recognition for Huang’s work includes his being awarded the Olympic Art Prize by the International Olympic Committee in 2008, according to Ora-Ora, an art gallery in Hong Kong.

A Sept. 8, 2022, article published on the website of the China Global Television Network, reflects on some of Huang’s past achievements as well as his plans for the future.

“God bless if I can live past 100 years old,” the article quotes him as saying. “When the time comes, I will hold an exhibit of my latest pieces.”