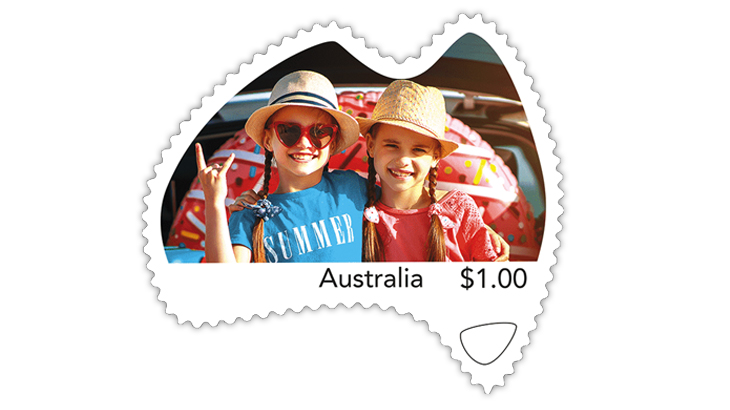 Australia Post is offering personalized stamps in nine shapes, including an outline map of Australia.

By using Australia Post’s website, a customer can upload an image into one of the shapes.

This image will appear inside of the selected shape, making it part of the stamp. On previous personalized stamps from Australia, the customer’s image was shown on a label attached to a postage stamp.

Australia Post is calling its new personalized stamps MyStamps. They are sold in sheets of 20 and available in denominations for domestic and international mail.

Australia Post is continuing to offer personalized stamps on labels attached to other stamps, including the Christmas stamps issued Nov. 1.

Australia Post was the first postal administration to produce personalized stamps, introducing them at the Australia 99 World Stamp Expo held March 19-24, 1999, in Melbourne.

Visitors to that show could have their photo taken at a special booth and then placed on a label next to a stamp.

In the article about personalized stamps on its website (the article is dated Dec. 16, 2016), Australia Post described the scene at the Melbourne show: “A stall was set up at Australia 99, without much fanfare, but word soon spread! People enthusiastically queued for their snapshot to be taken and placed into the tab of a 45 cent Polly Woodside stamp (originally issued as part of the Sailing Ships of Australia stamp issue in March 1999). Reports at the time say that people queued for one to two hours, just to get their own set! The then governor general Sir William Deane attended the official opening of Australia 99, and even he was presented with his own personalised stamp.”

Later in 1999, Australia Post issued a set of Greetings stamps with tabs that could be personalized.

In the aforementioned article, Australia Post said: “On 1 September 1999, Australia Post officially launched their first Personalised Stamps — a world first at the time. Then known as Personal Greetings stamps, six stamps were released based around six celebration themes (Happy Birthday, Happy Christmas, New Baby, Thinking of You, Congratulations and Greetings). A tab next to the stamp could be either personalised with a photo or kept ‘as is’ with a celebratory phrase in calligraphic font.”