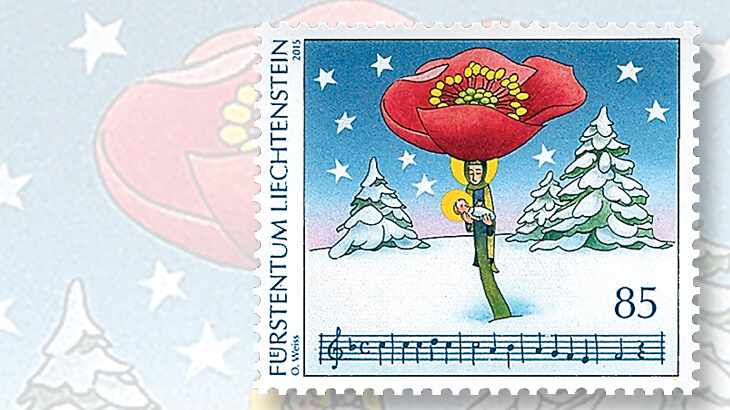 This Christmas stamp from Liechtenstein, representing the carol Lo, How a Rose E’er Blooming, was given a special prize by the St. Gabriel award committee. 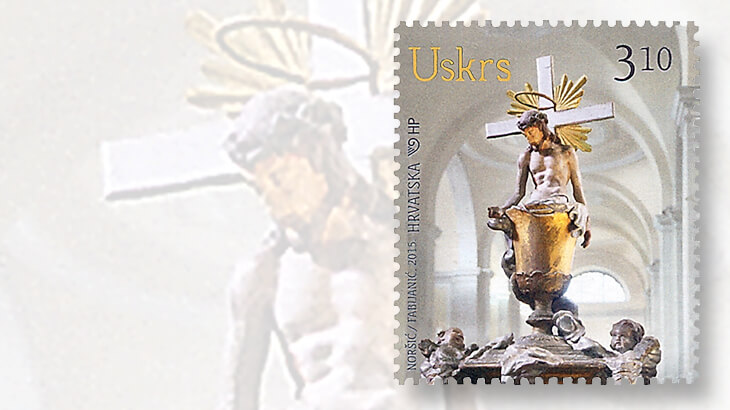 Tying with Australia for the St. Gabriel award was Croatia’s Easter stamp for 2015 picturing the chalice of the church of St. Euphemia at Rovinj. 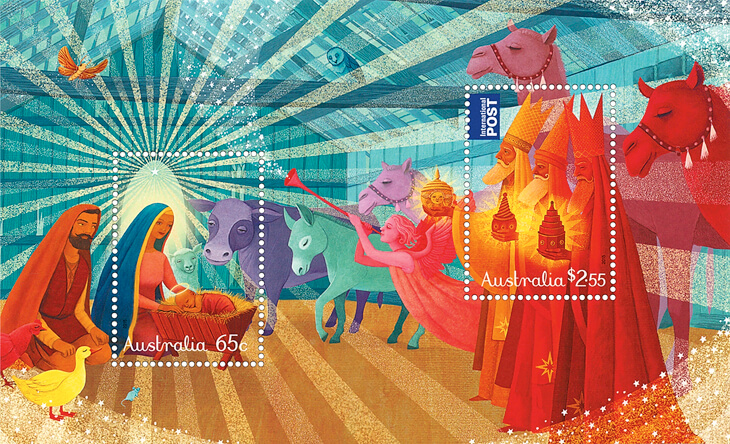 Australian and Croatian stamps honoring Christmas and Easter, the two pillars of religious feasts, tied for the 2016 St. Gabriel award for the best religious stamp issued in 2015.

The Australian Christmas souvenir sheet, issued Oct. 30, 2015, depicts a Nativity scene and the arrival of the magi, also known as the three wise men.

The design includes animals in various colors, and a scarlet-colored angel sounding a trumpet.

Words of appreciation for the recognition given to Australia Post were conveyed by Australian Ambassador to Italy Greg French, who attended the award ceremony held Oct. 2 at the Fioroni Museum of Legnago near Verona, Italy.

The Croatian Easter stamp, issued March 16, 2015, pictures the chalice of the Church of St. Euphemia at Rovinj. Crucifix and chalice interact, showing the moment when heaven and earth become one, as the body and blood of Christ in the Eucharist come to earth to nourish the church and its members.

The diploma and the St. Gabriel plaque were presented to Zelika Corak, head of the artistic committee of Croatian Post.

Corak expressed delight at the award and shared the moment of joy with graphic designer Norsic and the Consul General of Croatia Nevenka Grdinic, who also attended the ceremony.

A special prize was bestowed on Liechtenstein for the Christmas stamp depicting a gentle composition by Oskar Weiss.

This design was inspired by a 16th-century canticle about a rose, Lo, How a Rose E’er Blooming. In Weiss’ artistic perspective, the stem is formed by the Virgin Mary who, on a snowy and starry background, holds in her arms the baby Jesus.

Stefan Erne, head of the philatelic bureau of the principality, said that the St. Gabriel prize was an important recognition for the research that his bureau invests in the choice and preparation of stamp designs.

The St. Gabriel award for the best religious stamp of the year is presented to postal authorities for stamp issues of intrinsic artistic value and religious relevance. The award consists of a sterling silver plaque depicting the Annunciation by sculptor Enrico Manfrini.

The award was established in 1969 in Verona, and is named after “the Lord’s postman,” St. Gabriel.

To commemorate the Oct. 2 awards ceremony, the Italian post office (Poste Italiane) offered a special postmark and postcard featuring the Annunciation based on artwork by Nicola Matteo Boe, an inmate of a penitentiary just outside Milan. Using the pencil, his only artistic tool, Boe centered his artwork on a huge wing of the archangel Gabriel.