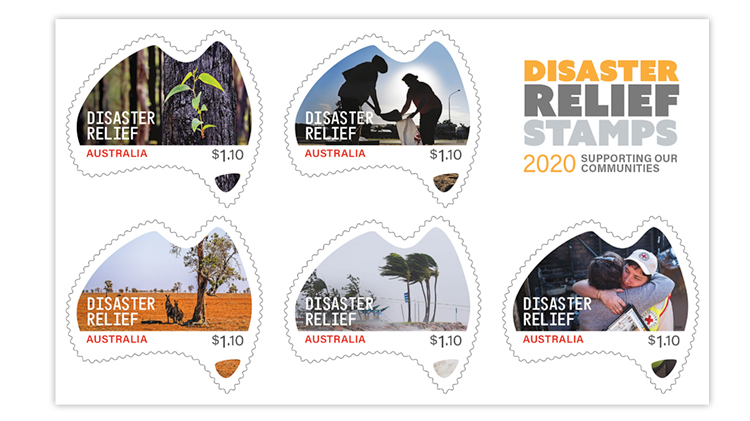 Australia Post issued five stamps Feb. 18 to raise money for the national Red Cross Disaster Relief and Recovery Fund “to go towards the on-the-ground support for communities impacted by the bushfires and other disasters when they happen,” according to the press release announcing the stamps.

The $1.10 domestic-rate self-adhesive Disaster Relief stamps are die-cut in the shape of Australia and show photographs of what Australia Post describes as “imagery of natural disasters.” Relief workers, trees and kangaroos are among the items depicted.

A detail of the photograph in the shape of the island of Tasmania is shown at lower right on each stamp.

The stamps are being sold in a booklet of five, and Australia Post is donating $2 to the Red Cross from every booklet sold. A total of 100,000 booklets were produced.

In the press release, Christine Holgate, Australia Post group chief executive officer and managing director, said, “The Post Office is a vital part of the local community, particularly in rural and regional Australia, and we are committed to doing everything that we can to support our communities in their recovery.”

Judy Slatyer, the Australian Red Cross chief executive officer, said: “The funds raised through the Disaster Relief stamps will help keep our staff and volunteers on the ground helping those affected by the bushfires, providing practical, local support where it’s needed to tens of thousands of people during and after the emergencies.”

Hundreds of fires destroyed millions of acres during Australia’s bushfire season that began in July 2019. New South Wales, one of the hardest-hit areas, experienced more than 200 days of fires.

A March 2 tweet from the NSW Rural Fire Service said: “For the first time since early July 2019, there is currently no active bush or grass fires in #NSW. That’s more than 240 days of fire activity for the state.”

For information about ordering the booklet of five stamps, visit the Australia Post shop.