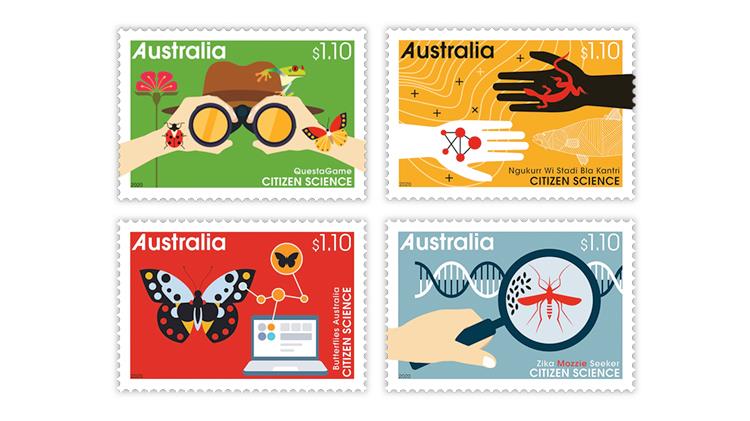 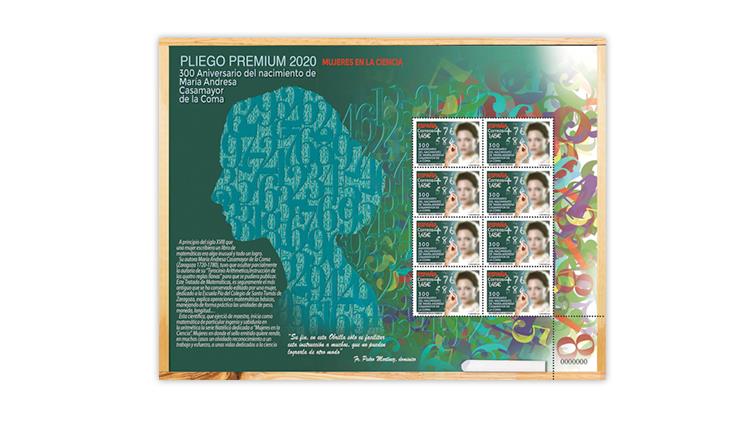 The first stamp in Spain’s Women in Science series commemorates the 300th birth anniversary of Maria Andresa Casamayor de la Coma. The €1.45 stamp was issued June 29 in a pane of eight. 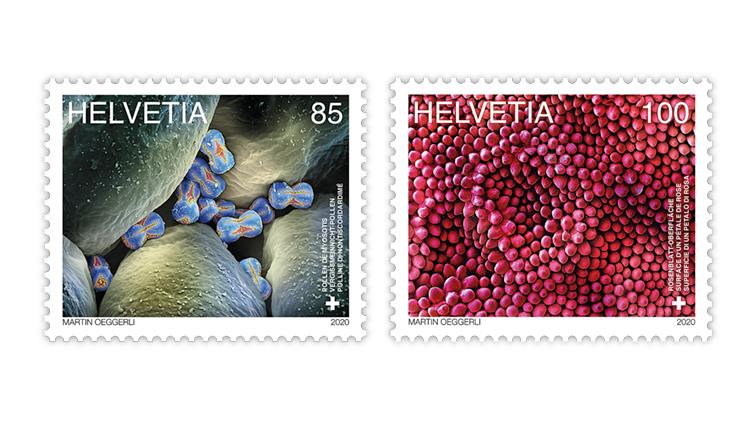 Two recent Swiss stamps reproduce microscopic images of flowers: pollen on a forget-me-not on the 85-centime stamp and the surface of a rose petal on the 100c (1-franc) stamp. The images were created by scientific photographer and molecular biologist Mart
Previous
Next

According to the Australian Citizen Science Association, “Citizen science involves public participation and collaboration in scientific research with the aim to increase scientific knowledge.”

With the help of that association, Australia Post selected the four projects to be represented on the stamps: QuestaGame, Ngukurr Wi Stadi Bla Kantri (We Study the Country), Butterflies Australia and Zika Mozzie Seeker.

The website for QuestaGame describes it as “the world’s first mobile game that takes you outdoors to discover, map and ultimately help protect life on our planet. Your sightings contribute to real research and conservation.”

Ngukurr Wi Stadi Bla Kantri is a collaboration between the remote Indigenous community of Ngukurr in the Northern Territory and scientists at Macquarie University in Sydney, Australia.

This collaboration is symbolized by hands on the stamp design.

An article on the university’s website, said that the research team had “discovered species new to science, found new populations of threatened species, preserved culturally-significant wetlands, and documented the community’s plants and animals in eight local languages.”

Butterflies and a laptop computer are pictured on the stamp honoring Butterflies Australia, a project that “aims to get everybody looking at butterflies and recording their sightings.”

On the final stamp, a mosquito (or a “mozzie” in Australian slang) is shown under a magnifying glass with a model of its DNA in the background.

The website of Metro South Health, a public health care provider in Queensland, said: “The ‘Zika Mozzie Seeker’ project is one of Australia’s first health-based citizen science projects. We’re looking for members of the public to collect mosquito eggs using traps in their backyards so we can test the DNA.”

Jonathan Chong designed the stamps. RA Printing produced them by offset lithography in sheets of 50 and in booklets of 10. The sheet stamps have traditional stamp gum, and the booklet stamps are self-adhesives.

The first stamp in the series honors the 300th birth anniversary of Maria Andresa Casamayor de la Coma. This €1.45 stamp was issued June 29 in a pane of eight.

Casamayor published the first of her two books on arithmetic, Tyrocinio Arithmetico, Instruccion De Las Quatro Reglas Llanas, at age 17. This book, which explains the basics of mathematics, is considered the first science book written by a Spanish woman, according to her biography on the website of Spain’s Royal Academy of History.

In the new-issue announcement, Correos describes the stamp as showing a “feminine image, blurred, a kind of mirage as her literary authorship was most of the time.

“A hand that traces numbers with white chalk completes the design that wants to boost the work of this woman of science, her and all those who reached great scientific milestones, who are reaching them and who will of course reach them.”

Included in the large selvage area of the pane is a profile of a woman with numbers inside her head; a short biography of Casamayor; and a quote from her friend, collaborator and rector of the Dominican College of San Vicente, Pedro Martinez.

Spain’s Royal Mint printed the pane of stamps by offset.

Swiss Post said: “Using a scanning electron microscope, he explores unknown worlds, making details perceptible that are invisible to the human eye: tiny fleas, pollen or leaves. He transitions from biologist to artist: with painstaking precision, he colours the black-and-white original photographs down to the finest detail.”

The 85-centime stamp depicts his microscopic image of pollen on a forget-me-not flower, and the 100c (1-franc) stamp shows the surface of a rose petal.

Cartor Security Printing of La Loupe, France, printed the stamps by offset in sheets of 20.